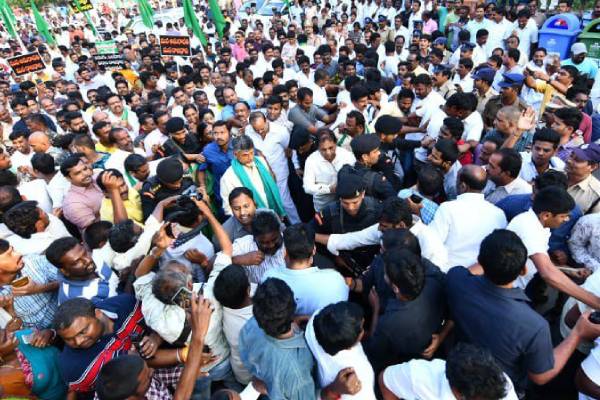 At the time of Telangana agitation, KCR made his MLAs resign and go for by-elections several times. This was used as an agitation tactic to keep the sentiment alive. Usually, the ruling parties would have an upper hand in any by-election. It can use the official machinery especially the revenue and police to its advantage. But KCR and his family always scored a big advantage over ruling parties by provoking separate state feelings in every by-election. Now, in AP, the by-election strategy has come to the surface in the ongoing agitation against Jagan 3 Capital Cities. It all began with Chandrababu Naidu challenging CM Jagan Reddy to go for re-election on the Capital shifting promise. Naidu has even offered to quit his four decades old political career if Jagan wins re-poll with 3 Capitals as his election promise.

YCP Ministers are not accepting Naidu challenge. But instead, they are asking Naidu to make all his TDP MLAs resign and seek re-election to test public pulse on Capital shifting. Is by-election a worthwhile option to increase pressure on Jagan Circar on Amaravati issue? Analysts say that Andhras are not like their Telangana cousins. AP society is vertically divided along caste and sub-caste lines. Sentiments like Capital continuation may not work effectively. But, if the entire state goes for re-election, things will not be so rosy for Jagan like in 2019 election.