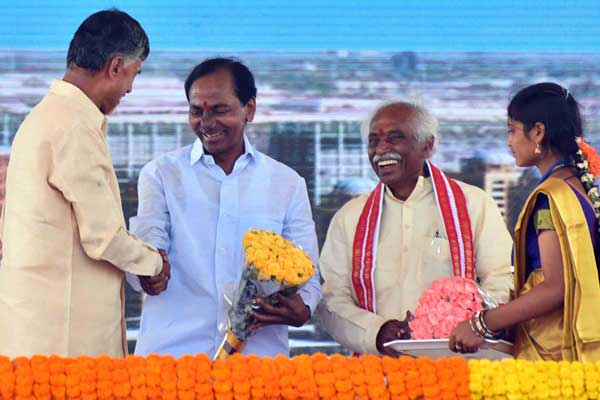 Telangana Chief Minister K. Chandrasekhar Rao buried all his past rivalries with Andhra Pradesh CM Chandrababu Naidu to attend the foundation laying ceremony for new state capital Amaravati. Interestingly, he stood the centre of attraction during the entire ceremony.

He flew in a special helicopter from Suryapet in Nalgonda district to reach Uddandarayunipalem, where TDP leader Maganti Gopinath received him. Eversince, PM Modi reached the venue, KCR and Babu were seen alongside Modi. People who attended the event commented that KCR was seen like he to belonged to AP and he stole the show by keeping aside all his bitterness with TDP and attending the event.

Interestingly, KCR’s name was also figured in the foundation stone pylon. Whenever the Telangana CM appeared on the LED TVs, there was a huge response from public. Babu felicitated KCR on stage and put his hand on KCR’s shoulder, people who attended the event were expressing their excitement. Telangana CM was also appreciated by political analysts and public for announcing that Telangana government would extend all the possible support for the development of Amaravati.

This would definitely pave way for friendly development between the two Telugu governments.