Kiccha Sudeep’s Vikrant Rona has been making headlines since its announcement. The teaser has heightened the excitement. The producers have now released the much awaited trailer in all languages including Telugu.

The Telugu trailer unveiled by Mega Power Star Ram Charan and wished the entire team all the best.The brilliant direction of Anup Bhandari and the rich visuals of William David are evident in the trailer. Vikrant Rona’s portrayal of the “devil who doesn’t know he is the devil” in the intriguing trailer cut has many people captivated and filled with questions.

This Pan India film’s trailer undoubtedly piqued interest. Ra Ra Rakkama, a recently released song, has topped the charts across all languages. Additionally, the makers are certain that this will be yet another spectacle from Sandalwood. Everyone is currently anticipating the movie’s release. 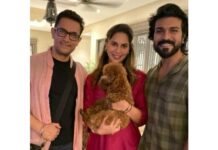