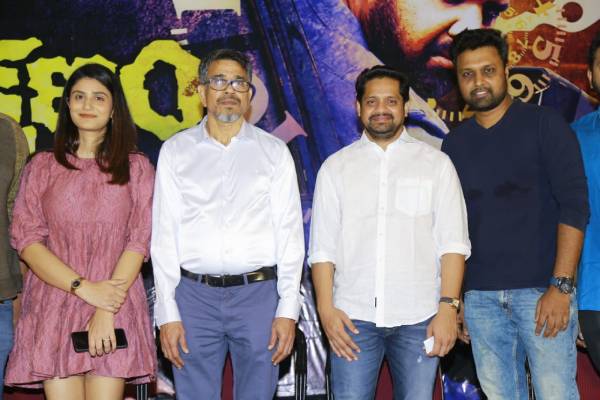 Kshana Kshanam starring Uday Shankar and Jia Sharma in the lead roles, had its trailer unveiled this morning. Leading producer Bunny Vas was the chief guest at the trailer launch held at Prasad Labs.
Speaking on this occasion, Bunny Vas said, “While doing commercials films, we keep some numbers in mind but for concept oriented films, one needs to have courage. I did feel the same while bankrolling ‘Chaavu Kaburu Challaga.’ I appreciate producers Dr. Warlu and Dr. Mannam Chandramouli. I have watched the film and liked it. So I have decided to take up the distribution of this film through Geetha Arts. Hero Uday Shankar looks promising and he is always experimenting with genres. That says about his passion and if he continues to do the same, he will reach heights. Having support in the industry is just for a push but ultimately hardwork has to pay off. I hope Uday Shankar will get the audiences support.”
Director of ‘Kshana Kshanam’ Karthik Medikonda added that he would never forget the suggestions and support of Bunny Vas. “I would also like to thank Tamannaah for unveiling our trailer. Small films need proper content to get the attention of audiences. Our film ‘Kshana Kshanam’ has good concept and the characters in the film will get definitely touch the audiences. Yet we have hidden few things in the trailer and those should be watched on the big screen.
Hero Uday Shankar said it feels immense pride that our film is getting released through Geetha Arts. “Me and my team will not forget the backing of Bunny Vas. His advices are very valuable to our film and our team is confident of delivering a hit. I would like to thank music director Koti garu for doing a role in this movie,” said Uday Shankar.
The trailer launch event was graced by heroine Jia Sharma, producers Warlu, Chandramouli, Raghu Kunche and music composer Roshan Salur.