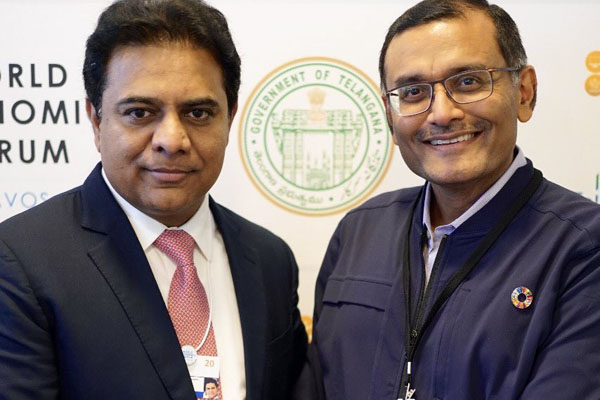 In a rare honor, the organizers of the World Economic Forum have invited Telangana Minister KTR to an exclusive ‘Gathering of World Economic Leaders’ (IGWEL): Keeping Pace – Technology Governance at a Crossroads’ in Davos on Thursday.

KTR is representing Telangana in the prestigious World Economic Forum meeting in Davos and taking part in several promotional programmes for the last three days and attracting big investments for Telangana.

Telangana has set up a special pavilion at Davos to attract investments.

On the other hand, neighbouring Andhra Pradesh CM YS Jagan has failed to send even a delegate to Davos as he is busy in capital shifting plans. Though AP is badly in need of investments to create wealth and employment in a revenue-deficit state, Jagan is bothered only about his petty politics and not about development of AP.

It is worth noting that Minister KTR is the only state-level (provincial) Minister to be invited to this coveted gathering. At the WEF, Minister KTR is granted a special badge with a shiny holographic sticker, which gives entry to the hyper exclusive Davos-within-Davos known as IGWEL meetings. This badge is given only to the senior government policymakers and head of the states.

IGWEL is a gathering which brings the world leaders onto a single platform and encourages them to talk more freely.

The organizers of the World Economic Forum invited world leaders including the Prime Ministers of various countries and National Ministers from various states and provinces.