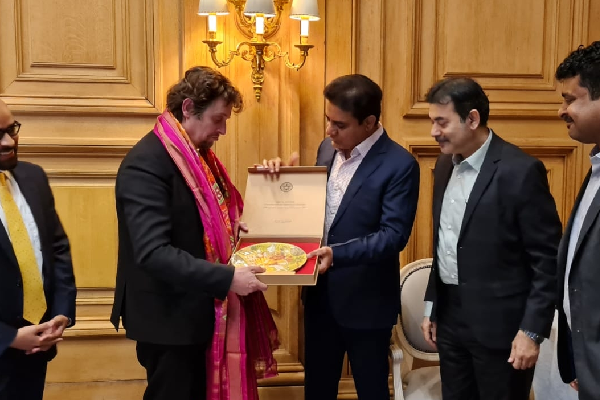 Telangana’s Information Technology and Industries Minister K.T. Rama Rao, who is on a visit to France, called on French Ambassador of Digital Affairs Henri Verdier in Paris.

Possible areas of collaboration like innovation, digitisation in governance and applications of Open Data were among a host of topics discussed in the meeting, the Minister’s office said here.

KTR spoke about various digital initiatives of the Telangana government and digital infrastructure being created in the state.

The KTR-led delegation reached Paris on Wednesday. The Minister will address the ‘Ambition India Business Forum’ to be held on Friday, at the French Senate in Paris.

He will also meet French industrialists and CEOs of various companies to invite investments to Telangana.

The French government invited the Minister to address the Forum.

The business event organised under the patronage of French President Emmanuel Macron aims to foster trade and investment relations between France and India.

It enables companies to be aware of the challenges of the Indian market as well as learn more about investment opportunities through updates on the Indian government’s economic policies and regulatory specificities.

Top 5 Best Memory Foam Pillows on Amazon and Why You Need Them?