Nandamuri Balakrishna and Krish have been careful and cautious about NTR’s biopic. They are picking up the right actors to reprise several legendary actors and surprise the audience on screen. However replacement for actors like SV Ranga Rao and Suryakantham cannot be found and hence Suryakantham’s role has been chopped off. Krish wanted an actor who can impress the audience as SV Ranga Rao in NTR.

He considered several names for the role. Mohan Babu who impressed as SVR in Mahanati too has been considered but Krish started his hunt for a better option. His hunt ended after he found a theatre artist who looks exactly like SVR. Making no time waste, Krish locked him and shot the episodes of SVR recently. Several other theatre artists have been roped in for crucial roles in NTR. The shoot of the film is taking place in Ramoji Film City currently.

The first installment NTR – Kathanayakudu will release on January 9th 2019. 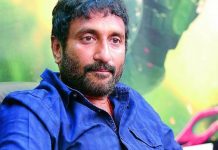