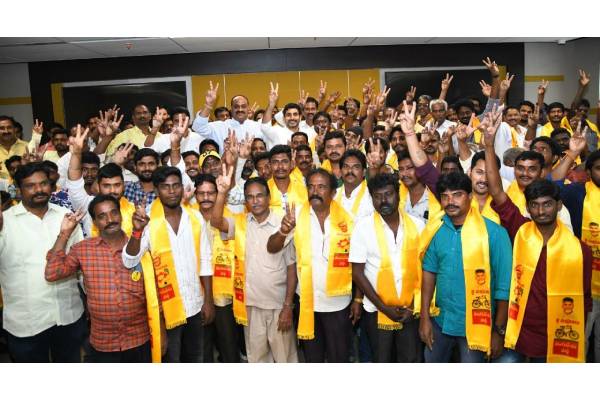 TDP general secretary, Nara Lokesh, on Thursday called upon all the sections in the Backward Classes (BCs) to wage a united fight for their empowerment.

Addressing the conveners of the BC Empowerment Committee at the party headquarters in Mangalagiri, Lokesh said that injustice is being done to the BCs in the YSRCP rule and they are facing various kinds of harassment in the State. To fight against this tyrannical attitude, all the communities in the BCs should join hands and wage a united fight, he told the Empowerment Committee conveners.

Lokesh wanted the panel conveners to ensure that all the sections in the Backward Classes communities be given proper importance. “The community-based problems should be studied and proper solutions should be found to resolve them,” he told the meeting.

The credit of empowering the BCs goes entirely to the late N T Rama Rao, who was inspired by B R Ambedkar and the Mahatma Jyotiba Phule, Lokesh said, adding that it was the TDP that created reservations for BCs in the local bodies elections. Chandrababu Naidu, who succeeded the late NTR, religiously followed him and initiated several measures for the uplift of the BCs, the TDP general secretary maintained.

Chief Minister, Jagan Mohan Reddy, who termed the BCs and back bones later backstabbed them and conspired to remove them from the positions that they were holding earlier, Lokesh said. False cases were foisted against the leaders from the community like Atchen Naidu, Yanamala Ramakrishnudu and Beeda Ravichandra Yadav, he stated.

Addressing the meeting, Atchen Naidu said that several programmes were implemented during the TDP regime for the uplift of the BCs both economically and politically. Besides extending loans for self-employment, 34 per cent seats were allotted for BCs in the local bodies polls to see to it that they grow politically, Atchen Naidu said.

Though during the TDP regime one residential school for each Assembly segment was set up, after Jagan Mohan Reddy came to power he destroyed the entire system and even discontinued the Adarana scheme besides slashing the percentage in reservations for them, the TDP state unit president stated. The corporation system has totally collapsed in the YSRCP rule, he said and stated that it is only the TDP that extended maximum assistance for BCs.