Switch to: తెలుగు
Home Movies Movie News Macherla Will Be As Entertaining As The Trailer: Nithin 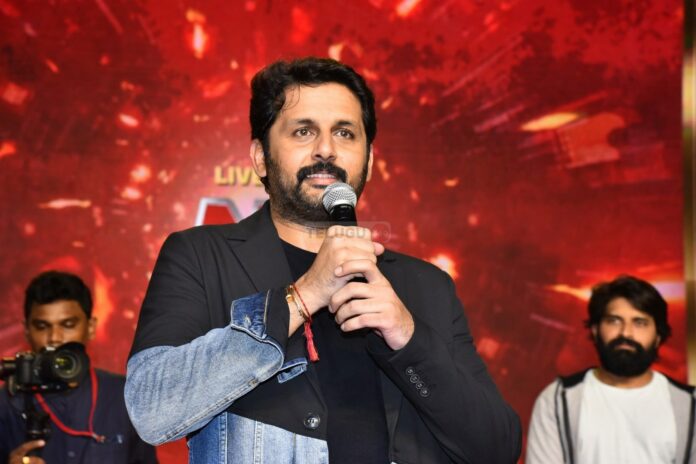 Young Hero Nithin’s Macherla Niyojakavargam has all positive vibes over it. After the three singles and the action teaser, the hype is touching roofs. The team is jubiliant and released the theatrical trailer at a grand event in Guntur. The trailer is a perfect blend of entertainment and mass making it an instant winner.

Speaking at the event, Nithin said, “I came to Guntur after Sye Hit. Then this same love was given. Then I came after that hit. This time I came before the movie. Looking at your energy, Macherla Niyojakavargam is sure to be a hit. It has been twenty years since he came to the industry. Without your support and love, this journey would not have happened. Your love should always be like this. The movie is as entertaining as the trailer of ‘Macherla Niyojakavargam’. The movie will release on August 12. You all will like it. You made the songs big hit. Also watch the movie and make it a big hit. Special thanks to director Anil Ravipudi who was the chief guest of this event. He came for me even though he was busy with Balayya Babu’s script work. It is a pleasure to work with Kriti Shetty and Catherine Tresa. Music director Sagar has given good songs and background music. It is going to be direct action in theaters on August 12″.

Anil Ravipudi, the Chief Guest of the event said,”Macherla Niyojakavargam trailer looks sure to be a blockbuster. We have not seen such mass action in recent times. The trailer of ‘Macherla Niyojakavargam’ gave an overwhelming mass vibe. All the best to Sudhakar Reddy, Nikita Reddy another production partner Hari, Krithi Shetty, Catherine Tresa and the rest of the unit. Nithin’s journey of twenty years is not an ordinary one. After seeing many ups and downs in his career, he stood at the top again with his hard work. Nithin should do more good movies like this. I also wish we could work together in the future”.