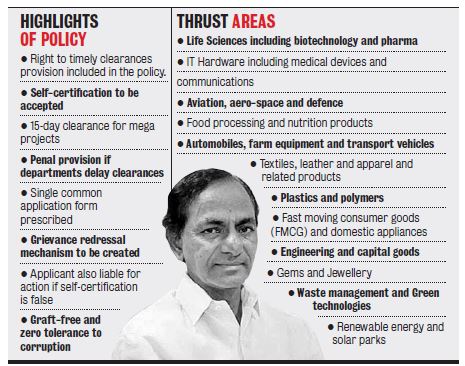 from across the globe with an aim to boost the image of the capital city—Hyderabad.  Various banners set up across the city carry the slogan ‘Make in Hyderabad.’  It is known that ‘Make in India,’ is the slogan that was coined by the prime minister Narendra Modi to lure investments

The HICC, which is hosting the mega industrial-policy meet in Hyderabad, was beautifully decorated. All the delegates of important companies are reportedly attending this meet. In fact, at least 2000 seating arrangements were made for VIPs alone, which reflect the magnitude of the meet.

The new industrial policy aims at granting industrial licenses to the companies without any hurdles. Also, there will be a single window system wherein prospective industries-wishing to set up their offices in Hyderabad-can directly apply for company licenses online, which will be cleared in two weeks, if we have to go by the buzz.

It is known that Microsoft-which was functioning in three units at rental facilities-recently got a permanent location in Hyderabad, which was confirmed when IT minister KTR was on US tour. Now, the government sources revealed that another mobile major—Micromax will set up its facility in Hyderabad soon.

Notably, a manufacturing unit of Amazon was recently set up near Hyderabad. All these developments are proving that no matter even if Hyderabad is the capital of Telangana, it will still remain as a global city that will welcome people from across the globe.

However, KCR imitating Modi is the sole question here. It is still not ascertained whether Modi gave any guidelines to KCR at personal level or the latter is trying to impress the prime minister, especially in the wake of cash-for-vote and subsequent meet of Chandrababu with Narendra Modi.