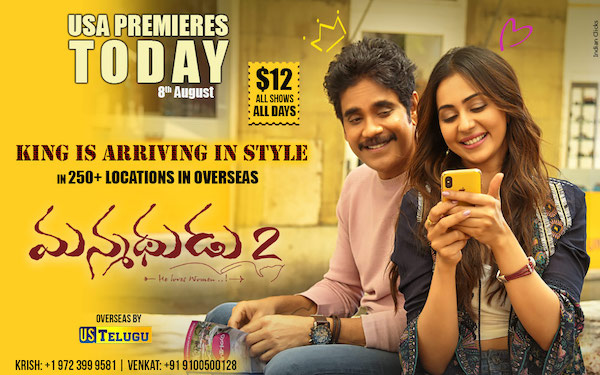 Leading distributor of Telugu cinema overseas, US Telugu, is bringing the upcoming film Manmadhudu 2 to the audiences in the US.

The film that releases on August 9th worldwide will have grand premieres across the world in over 250 locations on August 8.

Manmadhudu 2 is a joint production of Annapurna Studios, Aanandi Arts and Viacom 18 Studios is a romantic comedy.

Manmadhudu that released in 2002 is one of the most recognized films of King Nagarjuna’s career and has attained a cult status overtime. Manmadhudu 2 will have a completely new story but will be in a similar fun and entertaining space.

The team of US Telugu is excited to give this film a grand release.

Enjoy this Family Entertainer in Theaters and stay away from Piracy.