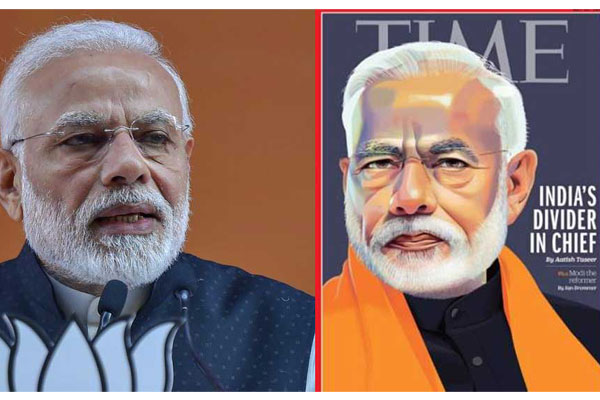 The TIME magazine has carried a sensational story on Prime Minister Narendra Modi on the cover of its May 20 issue. The world renowned magazine described Modi as the Divider-in-Chief of modern India. Noted author Aatish Taseer wrote the story which says that India became the world’s greatest democracies to fall to populism. He gave a strong headline: “Can the world’s largest democracy endure another five years of a Modi government?” The story predicted a tough time for Modi to win in the present election as there is no hope factor like in 2014.

The article suggested that Modi rode to power in 2014 on the strength rising religious nationalistic fervour, anti-Muslim sentiment and deep-seated caste bigotry. The TIME magazine story created sensation in political circles across the region. It openly said that the Hindutva policies of the Bharatiya Janata Party were the sole reason for the vertical division of the Indian polity today. As expected, BJP’s focus on polarisation of the religious vote bank has brought disrepute to the polity and putting the country’s democracy to a serious test.