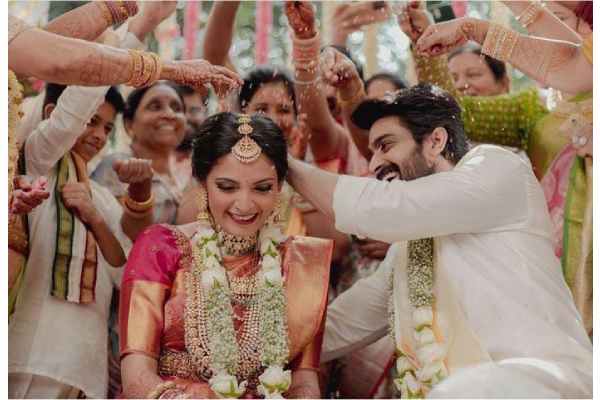 Popular Telugu actor Naga Shaurya took to his social media handle to share a picture of him tying the mangalsutra on his longtime girlfriend and interior designer Anusha N. Shetty as they tied the knot on Sunday in a private ceremony in a Bengaluru hotel.

The pictures and videos of their pre-wedding festivities and wedding ceremony are doing rounds all over social media.

In the picture, the couple looked stunning in traditional wedding attire. The actor wrote in the caption: “Introducing My Lifetime Responsibility.” As soon as the videos went viral on social media, congratulatory messages poured in for the couple from his fans and friends.

Their pre-wedding celebration happened on November 19 including mehendi ceremony and cocktail party. Naga can be seen in the pictures wearing blue kurta outfit, while Anusha wore a floral, embroidered lehenga.

For the wedding ceremony, he wore a white kurta with a dhoti and Anusha can be seen in traditional style golden embroidered sari, heavy jewellery and gajra in her hair. They will be organising a reception for industry friends and family members.

On the work front, Naga was recently seen in “Krishna Vrinda Vihari”. He will be next seen in a action entertainer “Rangabali” for which shooting has already started.