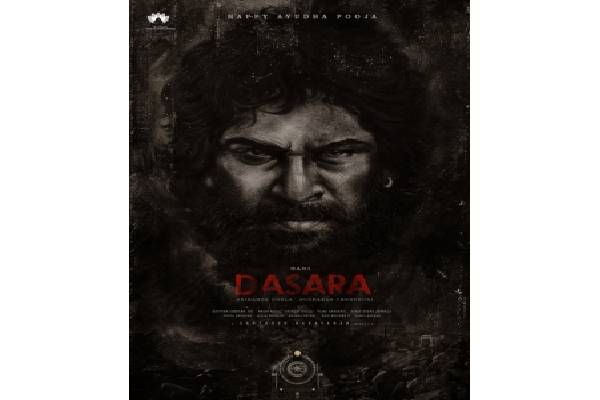 Termed as Telugu cinema’s ‘natural star’, Nani has experimented with different roles and diversified genres. Here comes his rustic and raw look from the movie ‘Dasara’ which is helmed by debut director Srikanth Odela.

On the auspicious occasion of Dussehra, the makers of ‘Dasara’ unveiled the raw, intense look of Nani, along with a promo that gives us a glimpse of the upcoming project.

Besides unveiling an intriguing poster featuring Nani in a raw, rustic pose, the makers also unveiled a dialogue promo with ‘Siren of Dasara’ as its title. Starting off with Telangana’s most popular ‘Bathukamma’ song in the backdrop, the video gives a small glimpse into the story, along with Nani’s powerful introduction.

The video features some raw images of Nani and Keerthy Suresh from their photoshoots of the look test for their respective roles for ‘Dasara’. Also, the animation portrays Nani standing on the railway track, uttering a powerful dialogue in the Telangana dialect.

Apart from Nani and Keerthy Suresh, actors Samuthirakani, Sai Kumar, Zarina Wahab, and others are to play significant roles in ‘Dasara’.

‘Dasara’ is bankrolled by Sudhakar Cherukuri under the production banner of Sri Lakshmi Venkateswara Cinemas.