Even before wrapping up his forthcoming film Paisa Vasool , Nandamuri Balakrishna has decided to commence shooting for his next project which will be helmed by K.S. Ravi Kumar and produced by C. Kalyan. The untitled film will see Nayanthara pairing up with Balakrishna for the third time after Sri Ramarajyam and Simha.

The regular shooting will commence from the 3rd of August in Hyderabad. A huge set has been erected in Ramoji Film City and the schedule will progress for nearly 30 days in which some crucial scenes featuring the principal cast will be shot. Prakash Raj and Jagapathi Babu will be playing crucial roles in the film.

Tipped to be a full length action entertainer, the film will be wrapped up by the end of this year. Chirantan Bhatt will render the soundtrack for the film. 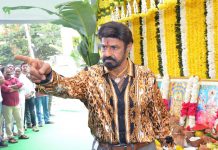