After impressing audience with meaty character roles in recent films, actor Aadhi Pinisetty is back in the lead role for a film titled as Neevevero.

The first teaser of the film has been unveiled today and it piques the interest for its interesting premise.

The one minute trailer positions the film as a suspense thriller which revolves around a murder and the quest to find the identity behind it.

The teaser starts off with Aadhi’s voice over narrating that the story unfolds in three different cities involving two love stories. Glimpses of Rithika and Tapsee Pannu are showcased. One incident changes the entire mood of the teaser and the gripping background score amps up the situations.

All in all, the teaser hints that another murder mystery is on cards for audience very soon.

Directed by Harinath, Neevevero is produced by Kona Venkat. Achu and Prasan rendered the soundtrack. Sai Sriram’s visuals are ok. 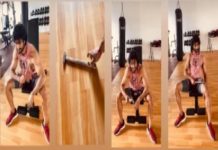 Sudheer Babu shows quirky use of hammer in the gym