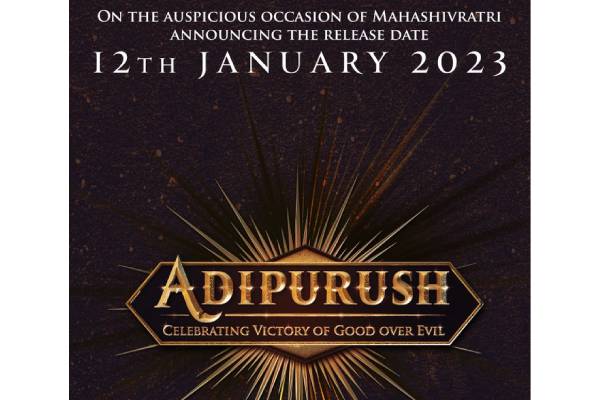 Prabhas is done with the shoot of Adipurush and the extensive post-production work of the film made the makers announce that the film will hit the screens in August this year. But Aamir Khan’s Laal Singh Chaddha is hitting the screens on the same day and the team of Adipurush decided to push the film’s release. On the auspicious day of Maha Shivaratri, the makers announced that Adipurush will hit the screens on January 12th 2023 in 3D in Telugu, Hindi, Tamil, Kannada and Malayalam languages.

The final copy of Adipurush is expected to be ready by November this year. Om Raut directed Adipurush which is an adaptation of Ramayana. Prabhas, Kriti Sanon and Saif Ali Khan played the lead roles in this epic which is made on a budget of Rs 400 crores. T Series and Retrophiles are the producers. Prabhas transformed himself to look fit as Lord Rama in Adipurush. The actor is shooting for Project K and the shoot is happening in Hyderabad currently.