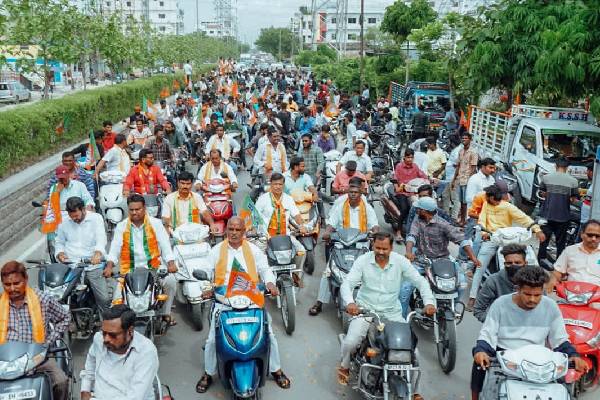 BJPs national executive is planned on 2nd and 3rd in Hyderabad. All the national leaders are flocking to Hyderabad to attend the meeting. They are aspiring to host their party’s flag on the Golkonda fort but that is bad news for Telangana state and people of Telangana. They cannot come to power with the current leadership and there is no place for their ideology in the state. They current state president or the present fighting leaders in BJP are unable to convince and gain the confidence of the people.

Telangana has been ruled by the Nizam and has significant minority, ST and SC population who will not vote for BJP. Their hard-line Hindutva politics don’t resonate with Telangana people and the statement made by the BJP president on finding shiv lingas in mosques did not go well with the people. In the current age all of them care for jobs, safety, security of their kids, education, good hospitals, and good infrastructure etc. BJP leadership instead of discussing the failures of the current govt on these areas they are still stuck with their age old Hindutva ideology.

When Mr. Modi entered the national politics after serving as the Chief Minister of Gujarat there was a vacuum for strong leader in national politics. The BJP leadership has to understand that the country and state are different, and you don’t need a 56-inch chest to rule the states. Telangana is ruled by Mr. KCR who is perceived as a strong leader and hence there is no scope for BJP to make that argument. Mr. Modi as Prime Minister did not give any new project or any assistance for Telangana, so how can BJP leadership ask for an opportunity to rule the state. They won 4 MPs in the last parliament election but none of them could bring any assistance or projects that benefit the state. All the projects were taken to Gujarat or BJP ruled states and these MPs did not request the Prime Minister to give the projects to Telangana state.

The state BJP leadership has frequently accused of the current government of corruption, but they did not file charges with the appropriate authorities. At least Mr. KA Paul went and complained to the CBI director but none of the four MPs made any attempt or complained to the authorities. So, they are not getting legitimacy on their fight against corruption. Earlier in the Jagan case it was Mr. Shankar Rao who went to the court and with the directions of the court CBI cases were registered and the cases are now pending at appropriate courts. No leader has gone to court but still they make allegations of putting the leaders behind bars. If they are so serious, they should start the legal battle so people can believe them.

The BJP is on a high after winning Dubbaka and Huzurabad elections but they dont have cadre in most of the constituencies. The win in both constituencies can be attributed to the contested candidates and the work they have done in the past. So, the party wants to repeat the same strategy by joining strong leaders from other parties. But they should realize that leaders only join when they feel that the party will come to power. And without building the cadre such strategies will not bring them to power. The state leadership made tall claims about leaders joining their party but unfortunately that did not happen. Even with the leaders that are planning to join it will not be sufficient for them to come to power.

The congress party has announced what it will do when they come to power during Rahul Gandhi’s last visit. Till date BJP did not propose an alternative to the current government or did not say what they will do when they come to power. Except for the hard-line Hindutva agenda they did not come up with a concrete plan for the development of the state. Even the central government did not give any incentives or support to the state for them to grow faster. It is just that there are doubts on congress ability to come to power. Few people are feeling that BJP could be the alternative, but BJP is bad news for Telangana and should never come to power in the state. They are party of Jhumlas and will not and cannot develop the state. The current state president is first time MP and is aspiring to be the CM of the state. They don’t have enough talent to come up with new ideas or innovative ideas to rule the state. If you ask the state president to name who can be in the cabinet, he will take a lot of time to answer because right now they don’t have that candidate either. To govern a state, you need a person with experience and except Etela Rajendar there is no other candidate in that party who can aspire to be CM. He is a late entry into the party so he might not get that chance. So how much ever the central leadership try it is impossible for them to come to power in Telangana.

BJP is bad news for Telangana and Mr. Modi has not done anything for the state.