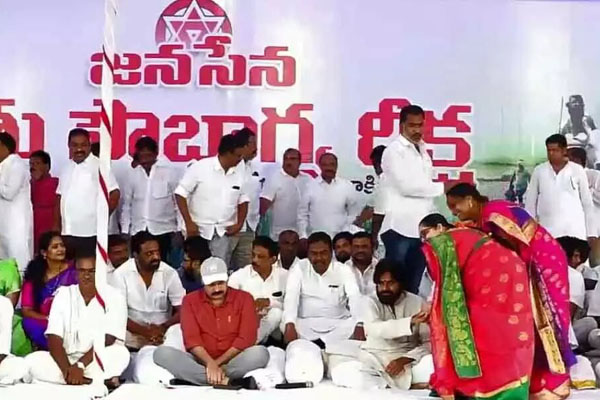 Jana Sena Party founder Pawan Kalyan sat on a ‘Rythu Soubhagya Deeksha’ in front of the JNTU University in Kakinada. He is demanding the Jagan Reddy government to extend benefits under Rythu Bharosa to all castes’ farmers. There are lot of allegations that farmers belonging to particular castes are not being given these benefits along political lines. This is for the first time that caste bias is coming to the fore in political protests repeatedly. CM Jagan Reddy’s frequent statements on castes have triggered an unwanted trend in the state. Jagan has demolished Amaravati by branding it as a real estate venture of a particular caste. CM also branded Telugu media saying it is monopolised by a particular caste.

In a reverse trend now, the opposition leaders are making counter allegations against YCP. Mostly the pro-YCP castes are getting Cash Transfers under Jagan’s Navaratnalu programmes. Jana Senani has started a well-timed agitation against this caste bias of Jagan Reddy. It is causing unbearable embarrassment to YCP Circar which is facing bitter attacks from the opposition in the Assembly session. Pawan is making farmers speak at his deeksha. They are saying that Jagan Reddy is not ensuring no good prices for their crops. Instead, CM is cruelly expecting farmers to beg for Rythu Bharosa small amounts.