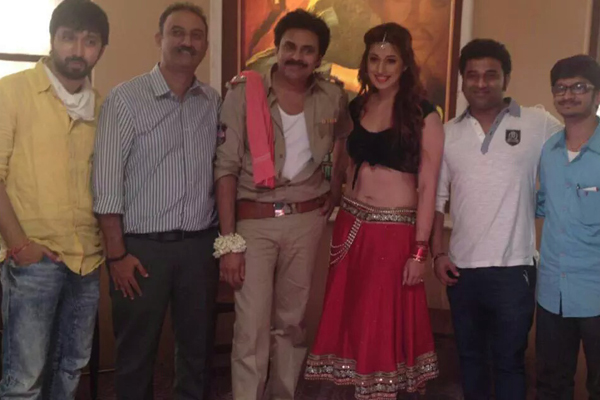 Powerstar Pawan Kalyan is presently shooting for his forthcoming action entertainer Sardar Gabbar Singh. Bobby is directing the film and Sharrat Marar is producing it. Recently, a huge set was erected in Ramanaidu Studios for an item song shoot.

Young actress Lakshmi Raai sizzled in this song along with Pawan Kalyan. The song shoot has been wrapped up yesterday evening. Reports from the unit revealed that Pawan Kalyan has danced to an energetic tune given by Devi Sri Prasad. It is believed that his dances in this song will mesmerize the audience. A couple of photos posted by Lakshmi Raai revealed that the song will be on the lines of Gabbar Singh’s popular item number, ‘Kevvu Keka’.

Kajal Aggarwal is the heroine in the film. The film is likely to release for Summer next year.