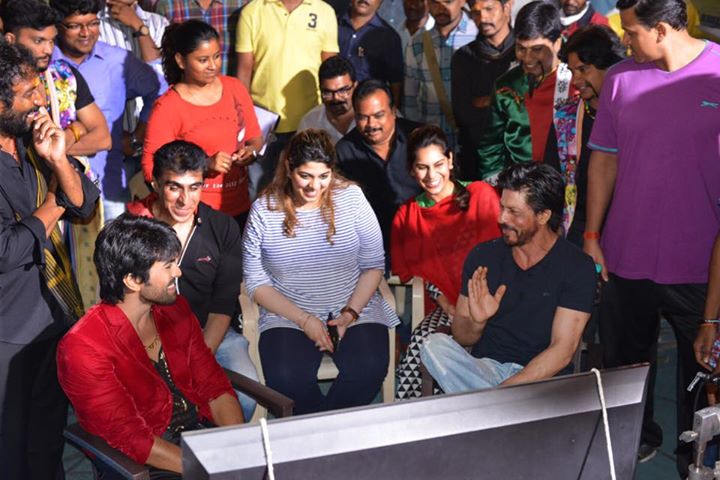 Bollywood superstar Shah Rukh Khan is making it a point in maintain good relations with Tollywood top stars. After meeting Tollywood superstar Mahesh Babu on the sets of his upcoming project Brahmotsavam recently, SRK dropped in at Mega Powerstar Ramcharan’s Bruce Lee sets on the last day of shoot at Ramoji Film City.

According to sources, Bollywood Badshah made a surprise visit to the sets when Charan was shooting for the title song and spent a while chatting with the crew.

Ramcharan posted some pics on his official faceboob account stating, “Superb surprise !! ‪#‎Shahrukhkhan‬!! on last day of ‪#‎BruceleeTheFighter‬ shoot.Girls on the sets went crazy.He saw parts of Brucelee title song and loved it !!”

For almost last one month SRK is shooting for his upcoming film Dilwale in RFC. Some crucial scenes are been canned on SRK, Kajol and Varun Dhawan.

On the other side, directed by Srinu Vaitla, Bruce Lee features Rakul Preet Singh and Kriti Kharbanda as the female leads. Produced by DVV Danayya, the film is all set to hit theaters on October 16. Megastar Chiranjeevi is playing special cameo in this film.