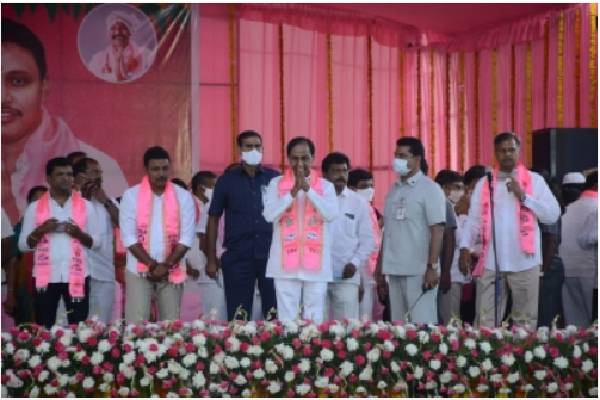 The TRS has organised its plenary meeting in a grand manner at Hitex Convention Centre in Gachibowli, Hyderabad on Monday (today).

TRS chief and Telangana Chief Minister K.Chandrasekhar Rao took this plenary as a prestige issue and it marks the completion of two decades of formation of TRS.
With this, KCR’s son and party working president K.T.Rama Rao, almost all the ministers in KCR’s cabinet, several party MLAs, MLCs, MPs worked day and night for the last one week to make this event a grand success.
However, the plenary meeting turned out to be a big disappointment for TRS leaders and cadre.
Although TRS leaders attended in large numbers than expected, there was no ‘josh’ or ‘Telangana sentiment’ that used to be the case in earlier plenaries.
The delegates attended the meeting as if they came to the venue just for attendance  sake, took selfies, had delicious lunch, snacks, tea and left.
While KCR was addressing the meeting, the delegates were rushing to the dining hall to have lunch. Though volunteers tried to stop them to head for lunch after KCR’s speech, none listened.
The seats at plenary meeting hall were seen vacant as delegates from districts rushed to the dining hall.
Few others were seen roaming at Hitex and around Hitech City and viewing high rise buildings located in the surroundings. They were seen near Durgam Cheruvu cable bridge, IKEA store, Inrobit mall etc and enjoying their visit to Hyderabad.
With this, the organisers had to request delegates roaming outside the venue to return to plenary meeting hall and hear the speeches of leaders.