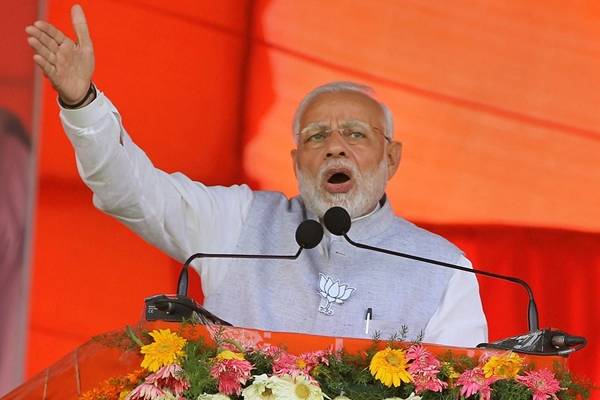 Addressing a massive public meeting at Parade Grounds, he exuded confidence that the BJP will come to power in Telangana.

He, however, surprisingly avoided criticising KCR or his government. As the public meeting was held a day after KCR launched a bitter attack on Modi and dared him to answer his questions, it was expected that the Prime Minister would give a strong counter.

Speaking at a meeting organised by TRS on Saturday to welcome opposition parties’ combined candidate for Presidential election, Yashwant Sinha, KCR had slammed Modi for ‘killing democracy’ and ‘acting like a adictator’.

Unlike in the past when Modi came down heavily on KCR for family rule and appeasement politics, this time he made no mention of the Chief Minister or TRS.

He instead focused on listing out steps taken by the Central government during the last eight years for the development of Telangana and what BJP would do if voted to power in the state.

“When BJP forms a double-engineered government in Telangana, every city and every village will see development at a rapid pace. We have to link all with positivity and development. We have to speed up the development and take Telangana to new heights,” he said.

The public meeting organised at the end of the two-day national executive of the BJP received a huge response with thousands of people from various parts of the state converging at Parade Grounds.

Several central ministers, chief ministers of BJP-ruled states and many top leaders of the party were present.

In his speech, Modi claimed that the support of Telangana people for BJP grew manifold since 2019 Lok Sabha elections when the party had bagged four seats.

Claiming that all round development of Telangana is among top priorities of BJP, the Prime Minister said his government was working continuously for the state’s development.

He said in the last eight years, his government tried to bring a change in the lives of every citizen and the benefit of development reached the people.

“Those remained backward and deprived for decades have been partners in development. Poor, Dalit, oppressed, backward and tribals all feel that BJP government is meeting their requirements and aspirations,” he said.

He claimed that the benefits of schemes of the Central government were reaching all sections of people in Telangana. He spoke about the help provided during Covid pandemic including free vaccines, free ration and free medical treatment of the poor.

Modi stated that his government was making a sincere effort to turn women’s power into national power. He told the public meeting that surveys show that women’s partnership has increased in the money deposited in the banks.

He pointed out that out of 45 crore Jan Dhan bank accounts opened in the country, Telangana accounted for one crore. He said 55 per cent of the bank accounts were of women.

“Two-third of Mudra loans were provided to women. Under Standup India, 80 per cent of loans were given to women.”

Speaking about the strengths of Telangana in research and innovation, he said the work done here for Covid vaccine and other equipment during the pandemic saved crores of lives.

Earlier, Amit Shah during his speech slammed KCR and TRS for family rule and called on the people to throw the TRS government out of power and give BJP a chance. He alleged that KCR is only bothered about making his son the chief minister.

He reiterated that the steering of TRS’ car is in the hands of MIM leader Asaduddin Owaisi.

He also alleged that KCR went back on his promise to celebrate Telangana Liberation Day officially due to pressure from Owaisi.

Shah said that KCR does not go to the state secretariat as a tantrik told him that if he goes to the secretariat he will lose the government.

BJP president Nadda alleged that KCR was resorting to undemocratic means to suppress opposition. He predicted that the BJP will definitely come to power in the state.

The BJP leader also remarked that the Kaleshwaram irrigation project became an ATM for KCR as he inflated the cost of the project from Rs 32,000 to Rs 132,000 crore. He alleged that because of corruption by the TRS government, Telangana’s debts mounted to Rs 4 lakh crore.