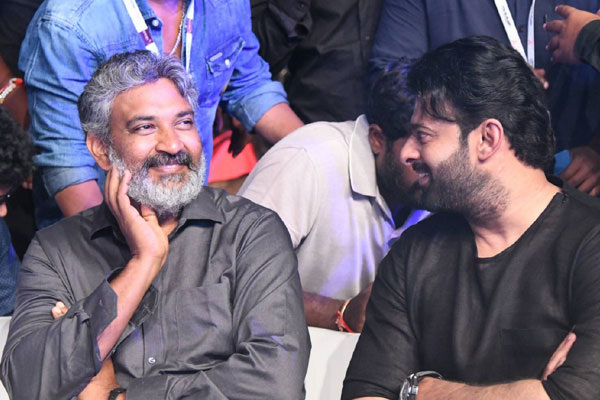 We have already posted an update that Rajamouli has watched Saaho and suggested 18 minutes of trimming in the second half. Before that, there are rumours everywhere that the Baahubali director hasn’t liked Saaho trailer, hence he hasn’t tweeted about it.

Busting down all the rumours and negative talk, on Sunday evening, the presence of Rajamouli at Saaho pre-release event clarified it all. He said, “Fans of all heroes always desire Prabhas to score a hit because Prabhas never speaks ill of anyone and a positive vibration echoes around him always”

He further stated: “When I told him Baahubali story, he started thinking about his next movie, because he’s confident of Baahubali and worried about the next project. After doing a big film, generally anyone would have gone for another big hero, but Prabhas picked a story rather than a big director”.

Talking about director Sujith, the Chatrapathi maker heaped showers of praise on the youngers. “Saaho First look clarified it, teaser cleared it and trailer made everyone understand the power of Sujith. He has handled the film like a pro. Saaho is literally standing on Sujith’s shoulders” he appended.

These words of Rajmouli should probably clarify the doubts of many people who are still thinking that the director hasn’t liked Saaho.