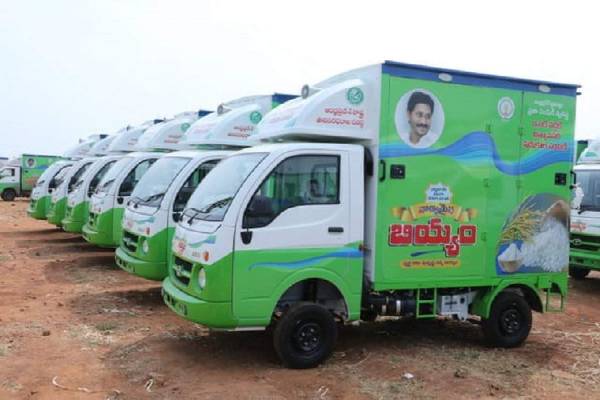 The YCP’s fascination for giving its party flag colours to the public property has given it many troubles and embarrassments. The YCP colours on the panchayat buildings have been dragged to the court in the past. Now, once again, the colours issue came to the fore. State Election Commissioner Ramesh Kumar issued fresh orders asking the Government to change the colours on the ration door vehicles.
In the beginning, based on the High Court orders, Ramesh Kumar allowed ration delivery through the vehicles. But, objections came pouring in that the YCP colours on the ration vehicles were having an impact on the voters. Wherever the panchayat elections were being held, the Government was asked not to use the present vehicles in their present condition to deliver the ration items.

Already, the SEC has put objections to the use of CM Jagan Reddy photos on the vehicles. Accordingly, the officials took suitable measures to hide the CM photos during ration distribution in the election-bound villages.
Ramesh Kumar’s order would be final in this respect. The YCP would have no say any further other than that it would have to approach the court once again. In its previous order itself, the High Court instructed the SEC to inspect the ration vehicles and give permission by making suitable suggestions.

The SEC instructed the officials to change colours to other those being used by the political parties. Going by this, the blue, green, yellow, red colours would have to be avoided considering their prominent use in the parties’ flags. The colours problem arose for the first in AP in the entire country only after the YCP started using its party colours on the Government buildings and property against which the Opposition parties were approaching the court.