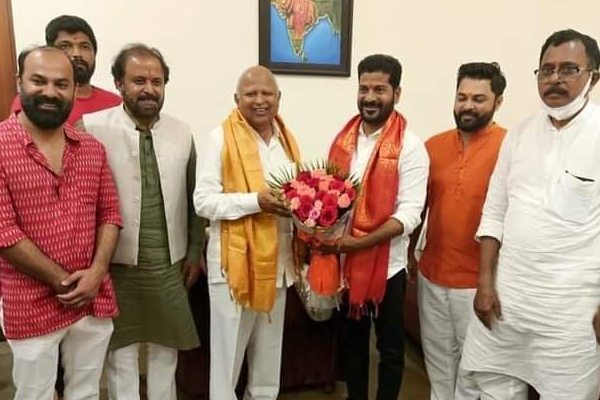 Telangana Pradesh Congress Committee chief Revanth Reddy is continuing to create a buzz and he has some ace up his sleeve every day. On Sunday evening, he sprang a surprise by calling on former TDP heavyweight and former home minister of the undivided AP, Devender Goud. He, party’s senior leaders Madhu Yashki Goud and Mallu Ravi, went over to the Tukkuguda residence of Devender Goud and held discussions for well over half-an –hour.

With this, the rumour mill went into a tizzy claiming that Devender Goud was joining the Congress Party. There were also rumours that Devender Goud’s son Veerender Goud too was joining the party. There were rumours that Vijender, who has joined the BJP after the 2019 elections, was upset at not being given any party position in the BJYM. Sources said he was considering resigning the party.

However, it turned out that both Devender and son Vijender Goud did not make any big bang announcement. Vijender Goud said that both Revanth and Madhu Goud came over to discuss several issues pertaining to the state politics. He said that he would continue to be in the BJP and said there could be points of convergence among all the opposition parties.

Madhu Yashki, who claimed he was like a family member of Devender Goud, termed the latter as a treasure trove of knowledge and experience. He said they have come to discuss the issues relating to development and progress of Telangana. Revanth Reddy said he would continue to come and seek the advice of Devender Goud. He said both Devender Goud and late S Jaipal Reddy were symbols of probity in public life. Over all, throughout the day Revanth Reddy trended on the social media and managed to hog the limelight on the electronic media. But, the end turned out to be an anti-climax as both father and the son were non-committal.