Switch to: తెలుగు
Home Politics Robbery of silver lions confirmed but no police case yet 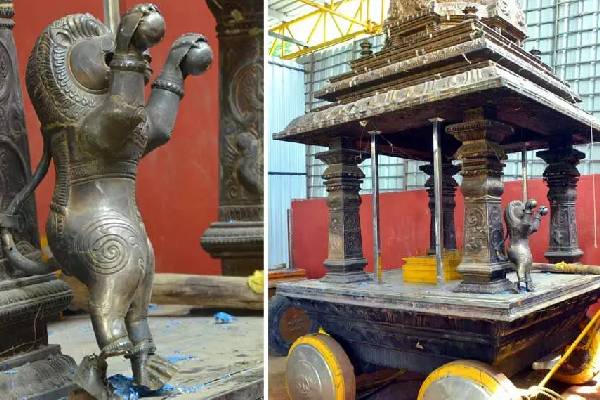 The endowment officials have finally concluded after a day that 3 silver lions were stolen from the Kanaka Durga temple in Vijayawada. Immediately, this should have been complained to the city police to launch investigation. But, as of now, an internal inquiry was begun in the endowments department. The regional joint commissioner and executive officer of the Penuganchiprolu temple will enquire and submit a report.

Even within the Durga temple, the officials launched an internal inquiry to find out when the robbery took place. The sole work of these departmental enquiries was to determine the day and time of robbery of lions. On the day of robbery yesterday, the executive officer said that lions might have been in a locker somewhere. Now, it’s being confirmed that the robbery has been committed and the lions are gone for good.

Questions are being raised now why no police inquiry is launched till now. Are there CCTV cameras there? Concerns are being expressed that no evidence is being available in temple incidents just like in Antarvedi chariot burning.

The Durga temple incident has created a bigger controversy. Even BJP AP President Somu Veerraju visited the spot and demanded immediate nabbing of the robbers.