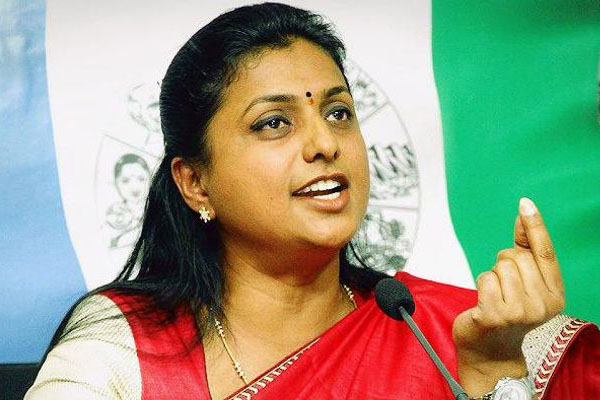 She expressed severe anger at Telangana ministers who are criticising YSR and Jagan as ‘thief’ and ‘dacoit’.

Roja said YSR never looted Telangana water in Krishna or Godavari and YSR took up several irrigation projects under ‘jala yagnam’ in Telangana and AP when he was from 2004 to 2009 with an intention to utilise Godavari and Krishna water to optimum level for the benefit of Andhra, Rayalaseema and Telangana regions in Undivided AP.

Roja said the Pothareddypadu project took up by YSR was also aimed to utilise Andhra share in Krishna water effectively.

Roja termed Telangana ministers as ‘ignorant’ who don’t know even ABCD of irrigation sector but talking in loud mouth and bad mouthing YSR and Jagan.

She said they had shown much restraint despite Telangana ministers abusing YSR and Jagan over Krishna water row but they will not tolerate this anymore.

“We will teach a fitting lesson to Telangana ministers who are abusing YSR and Jagan if they continue to bad mouth us,” Roja warned.

Roja alleged that Telangana government is meting out grave injustice to Andhra Pradesh by diverting AP’s share in Krishna water for generation of hydel power in Srisailam and Nagarjunasagar.

On one hand, AP has no adequate water reserves to meet irrigation and drinking water needs in Srisailam and Nagarjunasagar, but TS government is diverting this water for hydel power generation pushing AP into a water crisis.

Roja said AP CM Jagan is maintaining silence in the interests of both TS and AP despite TS leaders provoking him with abusive words on his father and himself.

Roja said there is a limit to everything and warned Telangana ministers not to cross their limits and test AP government’s patience.