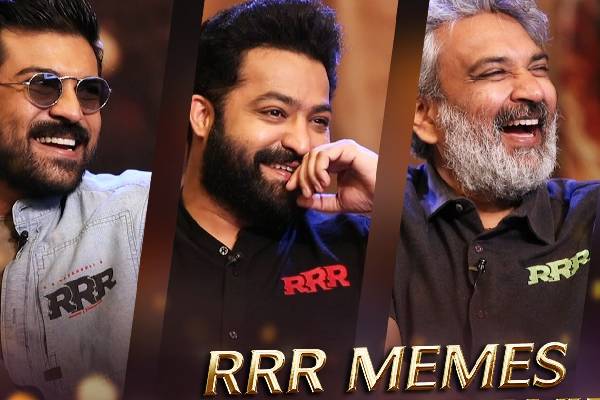 Ram Charan and NTR are in great sync with each other and it is clearly visible during the promotional plans of RRR. There are lakhs of memes on social media about the delay and about the release of RRR. The best memes are picked up and a special interview was planned with SS Rajamouli, NTR and Charan. Suma hosted the interview which is a hilarious watch. Some of the best memes are displayed on the screen and there was a discussion among the team. Most of the memes are on SS Rajamouli and his work.

NTR and Ram Charan’s inner feelings are discussed in the interview. NTR shared his experience during the shoot of Naatu Naatu song. Ram Charan told that Rajamouli took 17 takes for one of the shots in the song and he okayed the second take. Rajamouli carried a heartful smile when the memes are displayed and NTR, Charan discussed about them. This is one of the best promotional interviews of RRR. The film is heading for a record release this Friday.