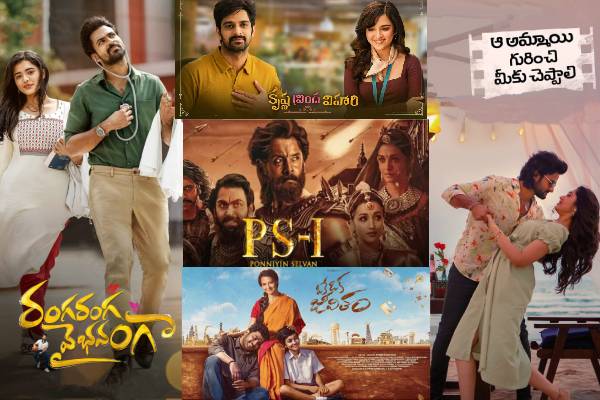 Liger is the next Tollywood film for which the audience are eagerly waiting for. The film is releasing tomorrow and a successful August comes to an end with Liger for Tollywood. A heap of small and medium budget films are testing their luck in September and the release dates are announced. Unfortunately, none of the films are carrying decent buzz and they are in struggling mode.

Vaisshnav Tej’s Ranga Ranga Vaibhavanga is releasing on September 2nd. The trailer was out recently but it fell short of the expectations. Jathi Ratnalu director Anudeep is presenting a small film First Day First Show and the film too is carrying low expectations. Satyadev and Tamannaah starrer Gurthunda Seethakalam is releasing on September 9th. Most of the audience are not aware about the film and its release. Kiran Abbavaram’s Nenu Meeku Baga Kavalsinavadini too is releasing on the same date and the makers are promoting the film.

Sharwanand who is struggling for success will test his luck with Oke Oka Jeevitham. The film sounds to be an emotional entertainer and the audience are not much interested about the film. None of the promotional content was impressive. Ranbir Kapoor’s Brahmastra is also releasing on September 9th. Vishal will test his luck with Laththi and the film releases on September 15th. Sudheer Babu and Krithi Shetty starrer Aa Ammayi Gurinchi Meeku Cheppali is releasing on September 16th. Regina and Nivetha Thomas starrer Saakini Daakini
will be in theatres on 16th.