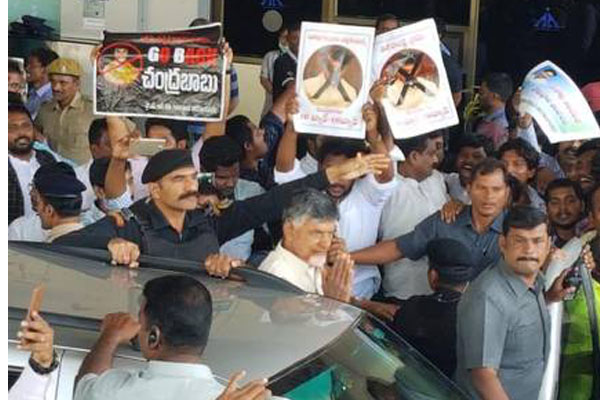 After a day-long confrontation, the police forced TDP boss Chandrababu Naidu to leave Vizag and go to Hyderabad. The police told Naidu to cancel his Praja Chaitanya Yatra as it would create law and order problems in the North Coastal Andhra region. From the airport itself, Naidu was forced to board a flight for Hyderabad.

Earlier, Naidu turned emotional when the police obstructed him. He dared the Vizag police to shoot him or encounter him. The officials and TDP leaders were stunned at Naidu’s anger. YCP continued harassment has caused Naidu’s emotional outburst.

On its part, the ruling YCP is very serious about preventing Naidu campaign in Vizag and Vizianagaram districts. Already, there are protests from assignment land owners, peethadhipathis, real estate developers and others against land encroachments. TDP says that CM Jaganmohan Reddy is literally scared of facing the people’s opposition on the issue of YCP land scams in Vizag and Bheemili areas.