Ashish Reddy and Anupama Parameswaran can be seen sharing love-filled moments, in the Preme Akasam song from Rowdy Boys, which has been released by ‘Rowdy Boy’ Vijay Devarakonda.

Devi Sri Prasad has come up with a youthful and soulful song which gets immense value addition from the young actor and the actress, whose chemistry is one of the highlights. It has been loaded with audio and visual moments to delight young audience.

Successful producer Dil Raju’s nephew Ashish Reddy is making his acting debut with Rowdy Boys. The makers of the movie, who are happy with the response evoked by the teaser, are planning to release the film in theatres soon. 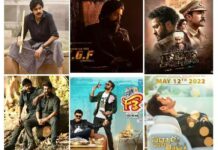