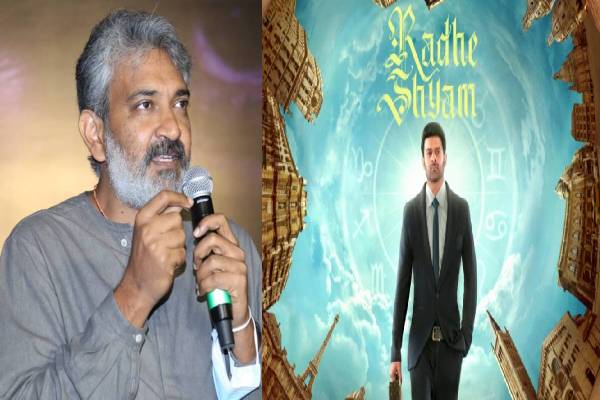 Prabhas and Rajamouli share a great bonding with each other. They worked for Baahubali franchise and Rajamouli several times revealed about the simplicity of Prabhas. For his upcoming movie Radhe Shyam, SS Rajamouli lent his voice for the Telugu version. The makers already announced that Big B Amitabh Bachchan is lending his voice for the Hindi version of Radhe Shyam. There are strong speculations that Radhe Shyam starts with the voiceover of Superstar Mahesh Babu for the Telugu version but the news is untrue.

SS Rajamouli recently lent his voice and completed the dubbing part of Radhe Shyam. The makers are expected to announce this soon. The promotions of Radhe Shyam will kick-start next week and the film is gearing up for a massive release on March 11th in Telugu, Hindi, Malayalam, Tamil and Kannada languages. Radhe Shyam is a romantic saga directed by Radha Krishna Kumar and Prabhas, Pooja Hegde played the lead roles. UV Creations and Gopikrishna Movies are the producers.