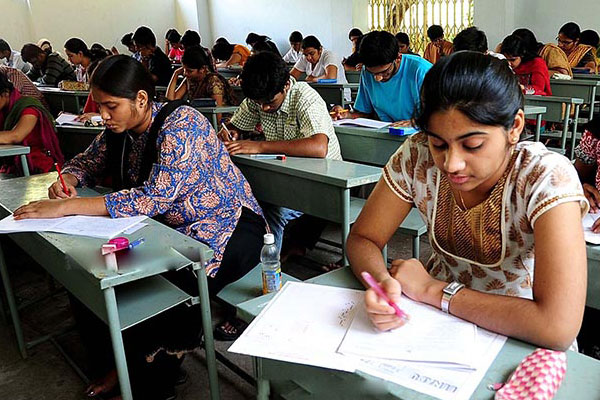 The Andhra Pradesh government on Saturday cancelled the SSC examinations in view of alarming rise in corona cases.

Education minister Audimulapu Suresh at a media briefing announced that the Andhra Pradesh government has cancelled the SSC exams and all students would be promoted to the next class without any examination, as it would not be possible to hold the exam due to the spread of coronavirus.

All the 10th class students will be promoted to the next class by giving them grades based on their internal assessment marks.

The education minister had earlier stated that the AP government will conduct the SSC examinations as scheduled from July 10, but the number of papers will be restricted to six instead of 11.

Andhra Pradesh reported the highest single-day surge in COVID-19 cases with an alarming number of 465 people testing positive for the infection in the last 24 hours, taking the tally in the state to 7,961. At least four people died of the virus during the period, raising the death count to 96.

The Telangana government had recently cancelled the SSC exams and decided to promote all the SSC students to the next class without conducting any examinations amid growing concerns over the rise in the number of coronavirus cases in the state. The Telangana government decision follows the High Court directive to not hold the exams in Hyderabad, Secunderabad and Ranga Reddy in view of the risks involved in conducting exams due to the high corona cases.

Former CM and TDP president Chandrababu Naidu had demanded immediate cancellation of the SSC examination seeking to know from the ruling YSRCP as to who would take responsibility if any untoward incident happens during the forthcoming SSC exam in view of the growing corona cases in the state. He also noted that the situation has drastically changed in AP since past week, with several corona positive people arriving in AP due to the flawed and casual approach of the government.