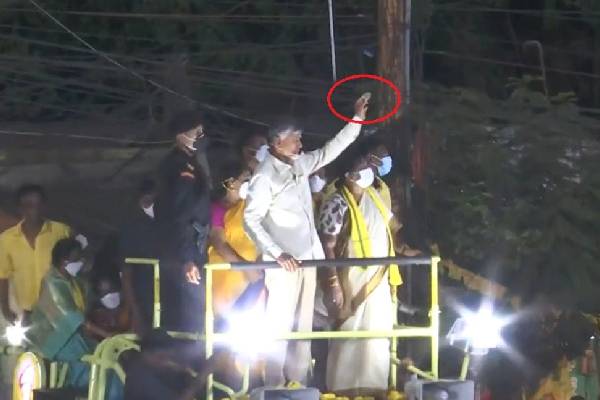 Stones were pelted by unknown persons at TDP chief and former AP CM N Chandrababu Naidu on Monday (today) while he was addressing a public meeting in Tirupathi to campaign for TDP candidate Panabaka Laxmi for the upcoming Tirupati Lok Sabha bypoll on April 17.

This incident created a flutter in the meeting.

Angry TDP activists raised “Jagan down down” slogans to protest the attack on their leaders. They alleged that YSRCP activists attacked Naidu.

Chandrababu also took this incident very seriously and resorted to a flash dharna at the venue.

He sat on the road demanding action against the culprits.

Though police tried hard to convince Naidu to withdraw his protest, he refused to relent.

TDP leaders and cadre also sat on the road along with Naidu in protest.

Naidu said under Jagan’s rule rowdyism is flourishing in Andhra Pradesh and urged voters to defeat YSRCP in Tirupati to end rowdy rule in the state.