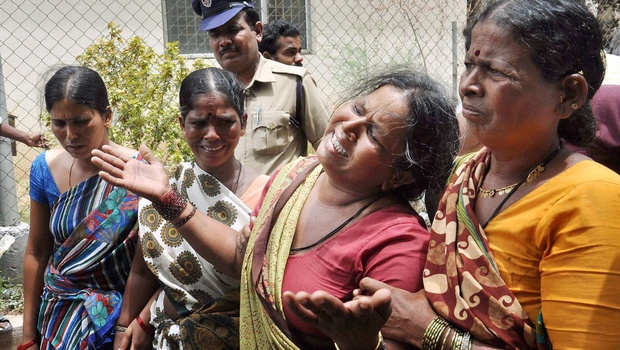 [intro]The following is the passionate appeal of Dr Rammohan Rao Nimmagadda to Mental Health Professionals in India to work towards rooting out the psychological sources of suicides and to guide the politicians in preventing them from acting as catalysts in the suicides of farmers and youth. The appeal is also addressed to all right thinking people to take up the responsibility upon themselves to prevent suicides of farmers and youth for a political cause. Dr Nimmagadda is a respected practicing doctor in New South Wales, Australia.[/intro]

We all know these facts and need no references.Over 90 percent of people who die by suicide have a mental illness at the time of their death. And the most common mental illness is depression.In the UK also, research has shown many people who die by suicide have a mental illness, most commonly depression. “Society made people view depression, a very common illness, primarily as a consequence of our failures, but not as a cause” Hundreds of young people killed themselves because their demand for a separate Telangana state was not met. Politicians went to their houses and praised them as if they are heroes who sacrificed for the sake of their native Land.Farmers all over country are committing suicide daily. Politicians in Government go to their houses and give them money. Opposition believes that their only duty is to blame Government for everything.This is what we see daily in TV.

These actions of praising them as heroes and giving money to families of dead persons further contributing to more suicides. One more incentive to die for people who are thinking of suicide due to untreated invisible mental pain. No one had a doubt on why these young people from average common families are killing themselves for a separate state while children of current Chief Minister of Telangana Mr. KC Rao and others who were working much harder for Telangana state and will be the biggest losers if Telangana state is not formed never tried to commit suicides? Why these farmers are killing themselves while many other farmers in same village with much higher debts and more suffering are not doing it?

People of all backgrounds are committing suicides daily but politicians and media are not interested in them. India accounted for the highest estimated number of suicides in the world in 2012 and officially stated suicides more than 100,000 every year according to a WHO report. People or politicians have no doubts of cause of suicides.They only know that financial problem caused the death. Probably people who cannot think or learn has no doubts.

Their current problem or disappointment or frustration only triggering something they already have. Actions of people and politicians only adding another incentive to commit suicides.
Finding the real cause to remove it may require first thinking and then Psychology autopsy of dead person. If we fail to do it, suicides will never stop. For example if farmers are provided everything they need, are the suicides going to disappear in farmers?

Do we blame ignorant plus arrogant politicians made by people who are forced to live with current imported Democracy and Constitution unsuitable to them? Are we agreeing with Winston Churchill who said that giving freedom and democracy to Indians is like giving stones to mad people? Let us try to look at ourselves first before blaming others. Are the mental health professionals in India doing enough to educate people and Government? Shall we ignore and be silent because politicians are not listening or not consulting relevant professionals on important problems? Are we silent because no one pays us for doing it? As Dr Peter Young, former director of international mental health services recently said “Clinicians are ethically responsible to advocate to policy makers when policies result in measurable heath harm”, we all have ethical or moral responsibility.

Is this negligence by profession not responsible for India having only 37 mental institutions for 1.2 billion people and India spending only 0.8% of its already small health budget on mental health? As a share of the total health budget for mental health, Britain spent the most (12.1 per cent), followed by New Zealand (11), Germany (10), the Netherlands (8), Denmark (8), the U.S. (7.5), Australia (7.4), Ireland (6.8).USA (6) % of the health budget. Is this because mental illness is more in those countries? Please note this spending is unrelated to richness and it is percentage of what we spend. (Correct me if recent figure are not same).

No one can believe that India is a poor country to provide minimum required health services to people if they see how much was spend directly and indirectly by Government for its president visiting Tirupati temple!Look at financial benefits MPs are taking and they are no less than advanced rich countries or how much it costs for Prime minister to attend marriage of his friend or parliamentary delegates visiting other countries? But the country is poor to transport dead body of soldier died in border!

I appeal especially to mental health Profession in India to take it as your responsibility to help to stop these regular suicides. Each suicide permanently destroys whole family. If politicians fail to listen, let us start educating people. All of us agree to Albert Einstein saying that “The world is a dangerous place to live; not because of the people who are evil, but because of the people who don’t do anything about it.” Is this not relevant to educated people in India and more importantly those Indians living overseas who love to discuss for hours about situation in India?
Thank you for reading completely,