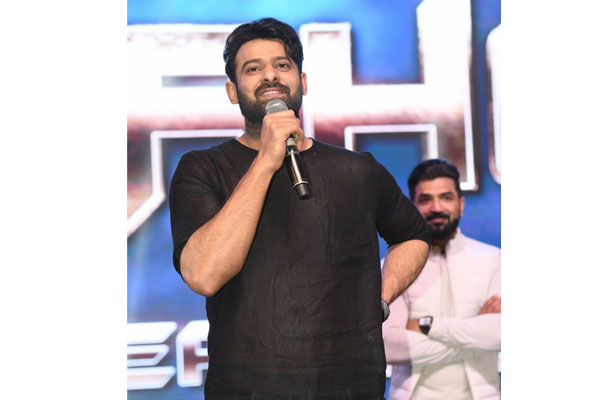 Speaking at the event, Prabhas thanked each and every technician for putting in a lot of efforts to bring out the best output for audience. He also appreciated the entire supporting cast for being a part of this magnum opus. He appreciated director Sujeeth for handling such a big project and huge star cast with a lot of ease.
Talking about his co-star Shraddha Kapoor, Prabhas showered praises for her dedication and support throughout the journey. She is a superb performer and did excellent job in action sequences, added Prabhas. About the producers, Prabhas said they would have easily made a profit of 100 Crores if they had wanted, but they didn’t compromise and went all out to make this a grand project.

Director Sujeeth praised Prabhas to the sky for his conviction and belief on his direction skills. He lauded the hard work of Shraddha Kapoor and her efforts to learn every line in the script and rehearse it before coming to sets the next day. He commended the technical team for ensuring that every frame is rich and grand. He also thanked the producers for trusting him and putting a lot of money to make this a pan-India film.

Rebel star Krishnam Raju wooed die hard fans of Prabhas and said he is very confident that Saaho will reach the high expectations of audience. Star producer Allu Aravind said that Baahubali formed the base for big ticket films in Tollywood and also took a Telugu hero to national level. He also appreciated director and producers for having bringing such a grand film to audience.

SS Rajamouli revealed that Prabhas believed in the story rather than going for big directors after the grand success of Baahubali. He said Sujeeth stunned everyone and cleared all doubts with the first look. He added that Sujeeth handled the film like a pro and said he is the backbone of Saaho.