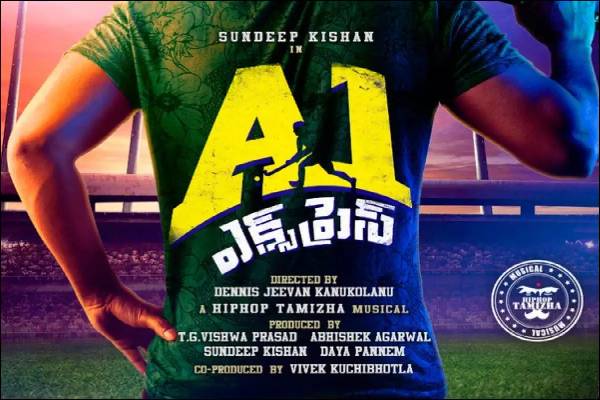 Right from the day, the first poster of A1 Express is released, the film was in news and caught everyone’s attention. It is the first attempt in hockey and is directed by Dennis Jeevan. Sundeep Kishan, Lavanya Tripathi, Rao Ramesh, Murali Sharma and others played the lead roles. Venkatadri Talkies in association with People Media Factory and Abhishek Agarwal Arts bankrolled the film. A1 Express is one notable film among the bunch of releases this weekend. Here is the review of this hockey based film:

A1 Express is inspired by the Tamil film Natpe Thunai. The story is laced around a hockey ground that the sports minister Ramesh (Rao Ramesh) tries to lease out for his own benefits. Sanju (Sundeep Kishan) is a youngster who is quickly in love with a hockey player Lavanya Rao (Lavanya Tripathi). The rest of A1 Express is all about the fight for the ground and for the sport amid corruption. Sanju’s past is the major surprise for this hockey-based sports drama. Watch A1 Express to know about the surprises that are on board.

A1 Express is always presented as a hockey-based film and it is told as Tollywood’s first film on hockey. But the film has all the ingredients in the right amounts. A1 Express is romantic, entertaining and the emotional episodes will sure strike hard. The interval block reveals the past of Sanju and makes the first half a decent one-time watch. Some of the episodes remind us about several Telugu films and some of the episodes are highly predictable.

The best part of A1 Express is that the director managed to connect all the dots well and they head finally for a hockey battle. The second half of A1 Express too carries the needed momentum and has enough flaws that slow down the film. The climax portions are shot well. Keeping the performances apart, the makers have spent lavishly on the product. A1 Express is a decent attempt with enough flaws but it is not a disappointing attempt.

Sundeep Kishan is sure a good actor of this generation. The actor explored new space with this A1 Express and he transformed himself to get the desired look. His performance is a treat to watch and he looks perfect as Sanju. Lavanya Tripathi gets the right role after ages. She looks apt as Lavanya Rao, a hockey player and does her part well. Rao Ramesh is terrific as always and he keeps the momentum going. Murali Sharma also gets a well-written role as a struggling coach and he is good. All the other actors are good in the film.

A1 Express has a gripping script. As said, A1 Express is showcased as a sports drama but the film is stuffed with all the ingredients. The dialogues are good and so is the screenplay of the film. But some of the portions of the film are quite predictable and slow-paced. Thanks to the makers for backing such a film and providing everything to get the needed output. A1 Express could be the costliest attempt in Sundeep Kishan’s career. The cinematography work is good and Hiphop Thamiza’s background score takes some of the episodes to the next level. Dennis Jeevan comes up with a decent attempt with his first film.

A1 Express is a decent attempt and the film is stuffed with all the ingredients in the backdrop of hockey. The performances along with the strong technical aspects make A1 Express a decent one-time watch.