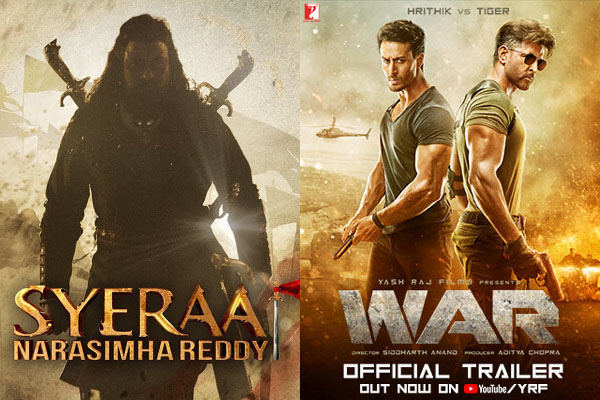 Sye Raa Narasimha Reddy, Megastar Chiranjeevi’s magnum opus, opened today to positive talk all over India. Especially, in Telugu states, the movie is unanimously termed hit. However, there have been fears among mega fans about how this movie will be received in other states. Moreover, there have been viewpoints that, ‘War’, another Bollywood movie that is releasing on the same day, will hamper the prospects of ‘Sye Raa’. But, to the pleasant surprise of Telugu audience, ‘Sye Raa’ movie is received well in Bollywood as well. Most of the Bollywood critics, if not all, gave a better rating to ‘Sye Raa’ than ‘War’.

‘War’ has Bollywood star Hrithik Roshan and recent youth icon of Bollywood ‘Tiger’ Shroff in the leading roles and so, before release, buzz also more for ‘War’ in Bollywood circuits. Yet, many websites that review Bollywood movies, gave either better or equal rating to ‘Sye Raa’ compared to ‘War’ after the release of the movies. Not only movie websites but even web versions of national media rated ‘Sye Raa’ better than ‘War’.

We will have to wait and see how far these positive reviews will be reflected in the collections in the Hindi belt.