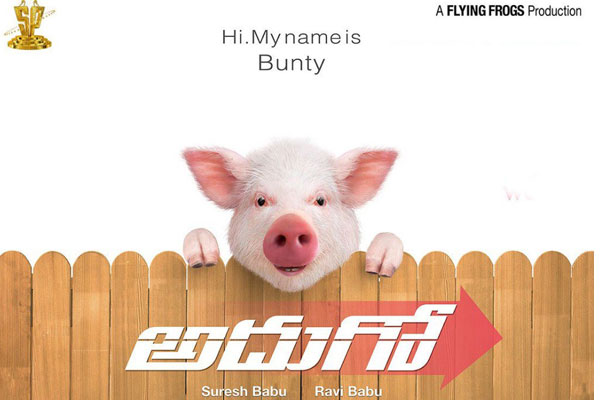 Adhugo is a partial live animated movie starring Ravi Babu , Abhishek Varma and Nabha Natesh in prominent roles. It is a drama written and directed by Ravi Babu and produced by Suresh Babu. Let us see how it comes out.

‘Adhugo’ is the story of a piglet which gets tangled up between two rivalling criminal groups with respect to animal racing. Lovers Abhishek, Raaji and their friends enter into this mess coincidentally after the criminals kidnap the piglet ‘Bunty’. In addition, two more mafia gangs are in search for the same piglet to find a microchip which has been tied inside the piglet. Rest of the story is about how all these individual groups come across one another while searching for Bunty, about how piglet has been rescued by the owner.

The idea to make a live animation film is commendable and the story premise has been deliberately put simple. The narration is where this film faltered. Director Ravibabu is known for Hatke films, audience are open to accept some crazy stuff here and there – given other aspects are properly handled. But the problem with this film is with weird characterizations, absurd comedy (Piglet pooping on the face of the villain , the villain spitting pan on his sidekicks’ shirts and faces throughout the film – such scenes were somewhat disgusting) .

In 1 Hr 50 Minutes of long run time , ‘ Adhugo ‘ barely makes you laugh. The animation quality is good for Telugu film standards. Veteran hero Rajendra Prasad lends his voice to a pig. In actors, the only known faces were Allari Ravibabu himself, heroine Nabha Natesh.

‘Adhugo ‘is a disappointing fare. This 110 minutes short duration film fails to make audience laugh. However, with no other engaging elements, ADHUGO is a skippable film.