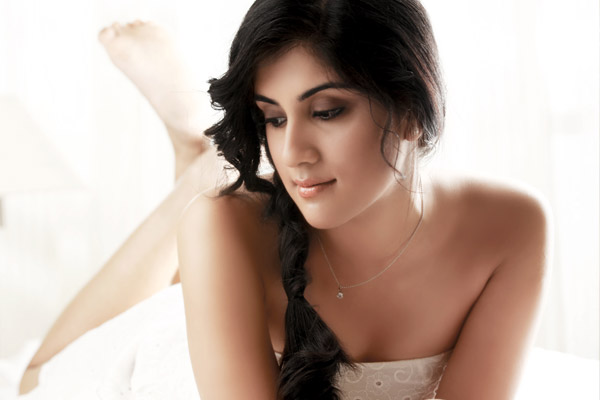 Dhanya Balakrishna’s appearance, a lively face, a tall personality with a heartening smile always hidden in her ensures that little charm always stays intact. However, not often she’s been the lead girl in a movie. She came to terms with that sans much fuss, enjoying her appearances in films including Love Failure, Seethamma Vakitlo Sirimalle Chettu, especially the latter one ensuring her much popularity with her lines swooning over Mahesh Babu. Then, a unique role in the form of Second Hand dropped by and she took it with both hands. Things somehow didn’t progress at a speed that she would have wished to. Chinnadana Neekosam was the next most prominent role she bagged, now this week, she shall be seen in Omkar’s Raju Gari Gadhi, followed by films with Sudheer Babu, Kishore Tirumala. An exclusive chat with T360.com reveals more of her personal side.

On not doing films regularly in the last couple of years

I am just not there. I need to do something good, work nevertheless is running. Chinnadana Neekosam had me playing a fairly small role and I didn’t have any releases after that. Rajugari Gadi has me playing the lead on paper but there are seven of us sharing equal space in the whole story. We get into a haunted house through a reality show. There is Vidyullekha, a new actor Ankita from Mumbai and others. I haven’t had any good offers over the last one and a half year. Omkar’s story was fantastic, a thriller that has an underlined twist and rationalises the whole horror in the movie.

On working a horror film set in a haunted house

They built a set in Hyderabad and we were practically living in the haunted house for 30 or 35 days. With the seven of us being in every shot for seventy percent of the movie, we learnt a lot of patience and literally living with each other under the same roof and not ending up killing each other is the biggest success. It is more or less like who survives in the haunted house at the end. Hence it had all of us experiencing all of these spooky ghostly incidents, an amazing learning experience more than anything, superbly coordinated by Omkar.

About being punctual on the sets and the experiences

If they say my shot is between 9.45 to 10.10 I have to be there on time. If I am late by five minutes, I will be made to wait till everybody’s shot is done and then I would be summoned in the last. Lot of artistes would be involved, getting their dates would be difficult, it was a budgeted film we had to do it in a fast pace. We were shooting from morning to night and that was mentioned in the contract. The story was really good and all acted well. I tried to keep my work a little subtle and low key and showed with my facial expressions. No songs in the film but there is an intro song when we get into the house ranging for two and a half minutes. We shot in last November, may be they were waiting for the right time to release, hence the delay.

On her future projects

Next is Bhale Manchi Roju by 70mm Entertainments starring Sudheer Babu. I play the hero’s love interest. The director Sriram Aditya watched Second Hand and approached me for the role. It is a new age cinema that happens in a day. The turn of events is what makes the story interesting. When it is not one of the lead roles, they usually brush it off and say it is for ten days or fifteen days. The director gave me a full rounded characterisation, convinced me really well, was eloquent and had plenty of clarity. The audio release is being planned for November end. That is followed by Tatineni Satya’s project with Sachiin Joshi, am playing the heroine’s friend. Harikatha director Kishore Tirumala makes me play the hero and the heroine’s common friend.

About the infamous tweet on the equation between Karnataka and TN

I did a really stupid mistake, I was 20 or 21 when I did that. I regret it and didn’t have the maturity to understand what people perceived of me. I didn’t know I was big and that people take me seriously. I was foolish enough to not know that. One and a half year later, I did Raja Rani which was a blockbuster. I will not blame the tweet for not giving me roles, I do whatever comes my way, big or small. I do it because acting makes me happy, do theatre where there is no money. My parents have been forcing me to get married, told them hopefully next time but the only condition is come rain or sunshine, I will continue to work in films. I can’t stop acting.