Interview : Jagadish – I learnt a lot from Rajamouli 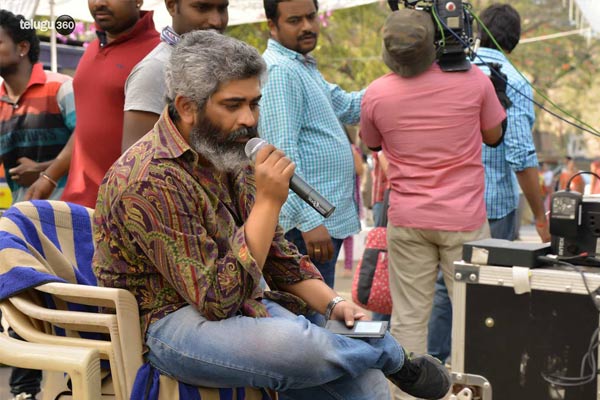 [intro]The ‘lekka’ to be a director
[/intro]
The Vijayawada-born Jagadish, director of Lacchindeviki O Lekkundi, has taken a long route to fulfill his dream to be a storyteller, from missing a chance to work in Aithe, to working for Amrutham and joining Rajamouli’s team later. He surprisingly wanted to choose between politics and cinema. The latter happened, as he realised, his attitude suited the celluloid better. Working with Rajamouli till Eega and taking a year off to write the script for LoL, that stars Lavanya Tripathi and Naveen Chandra, his abundant experience in small screen and gradually, the big screen gave him the right grooming ground. The film, about a financial issue in a contemporary setup is set to hit screens soon. More on that, in an exclusive conversation with T360.com

On his experience on Rajamouli’s sets

In this travel, I learnt a lot from Rajamouli, he would take me around everywhere and I worked in every department. He would give me a task and move on and I would complete it. I then started getting a command on things I didn’t know at all in the first place. While making Magadheera over two years, I developed confidence in executing work as well as writing a script. The genre that is in demand and is working is what matters at that moment. I wanted to add an issue that has not been touched before. The film deals with a financial issue, it is an issue based entertainer. I wanted to do this kind of crime comedy as people will relate to it easily. After Eega, I took a year’s gap and worked on this script. There are a number of entertainers and it is not necessary that every film will run. If the audience’s thought process matches with the script, we take up such subject.

Working for television and not compromising on the output

I worked as an associate director for Amrutham, it was a satirical serial. Gunnam Gangaraju is a good writer, even when he would go on tour, he would fax the day’s dialogues from there. It was a great experience working with him. Working with Rajamouli was an icing on the cake. He believes that if you link all the departments, the output will be perfect. From the script stage to the Vijaya Yatra, I would be there and got habituated to his style of functioning. If you are in his team, you will never settle for mediocrity, striving till the last hour, stretching your imagination to see if you can get anything new and better. Everyone is saying I look like him, I had this beard for a long time and it just stayed. One advantage is, I have been getting an easy entry to a lot of places on account of my resemblance with Rajamouli.

On what is LoL all about

Every song is connected to the story and shot on a different level. This is the first time JP Reddy sang a song. In this film, the girl takes selfies before going for a shower and posts it online. She wants to know what clothes she needs to wear and dress in the one that fetches more likes. Her character has been established well. She is a selfie girl and he (Naveen Chandra) is a selfish guy. Her parents are employees who get killed in an accident. She works in the place where they worked previously to get the feeling that they are with her. There is a con thread with JP as a manager. Lavanya gets into a mass character and Naveen Chandra is a front office executive. There is a conspiracy that happens that leads to an issue and she becomes a goddess and a ghost as well.

The characters in LoL and the making

She is portrayed as a bold girl and has a full length character. I saw Naveen Chandra and Lavanya during the making of Andala Rakshasi. Naveen worked in Tamil cinema as well and he did a good job. The film was totally shot in Hyderabad. I loved that couple though the film didn’t work out well at the BO. Everyone loved the pair and when it was telecast on television, the TRPs were on an all time high. Hanu Raghavpudi did a lot of magic and helped me a lot in this film too. The music being composed by Keeravani, he had asked me for a bound script and said there was length somewhere and lag elsewhere. After I made the corrections, he wrote a report that everything was fine and I can go ahead with the shoot. The concept is based on Lacchindevi and in Rayalseema they use the word lekka for money or as an account. We have been thinking for a long time about the title and felt LoL is a right one. Ajay, Brahmaji, Bhadram are part of the cast. There is nothing that stands disconnected, everything is linked to the story. We shot for 62 days, shooting on the road was tough.