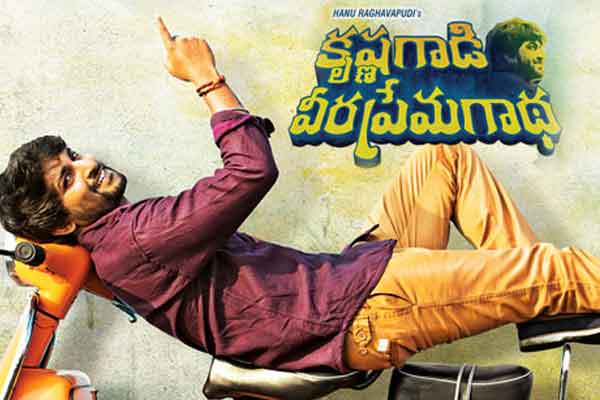 After a huge round of aggressive pre release promotions, Nani’s Krishna Gadi Veera Prema Gadha has hit the screens today. Hanu Raghavapudi of Andhala Rakshashi fame is the director and Mehrene Pirzada is making her debut as the female lead in the film. 14 Reels Entertainment banner, who produced films like Dookudu, Legend, Aagadu and 1-Nenokkadine is the production unit for this much anticipated film.

Krishna Gadi Veera Prema Gaadha(KVPG) has a variety and interesting plot. It’s mainly about a Cowardice young guy Krishna(Nani) and his lover Mahalakshmi(Mehrene). Set in RayalaSeema, this lighter vein and suspense mixed plot runs in three parallel threads which eventually becomes one. First thread is cute love story between Krishna and Mahalakshmi, Second one is faction rivalry between Rajanna and Appi Reddy, Third one is Brave police officer ACP Srikanth(Sampath)’s tirade against Hyderabad’s under world (Murali Sharma).

And each one of these threads has one unique genre Romance, Action and Suspense respectively. Krishna and Lakshmi who pretends to be hating each other in public are actually childhood lovers who kept it as best secret in the village for 15 years. How this couple is linked to Rajanna, How Rajanna is linked to ACP Srikanth, How the conflict point ( Kidnap of ACP’s kids) occurs and resolved,watch it on big screen.

Story is one of the best in recent times.

Nani who got applause for his comedy timing in his previous movie Bhale Bhale Magadivoy has taken it further in KVPG.Be it in teasing scenes between him and heroine ( or) in childish scenes along with kids (or) in frieghtened by presence of factionists scenes , Nani simply excelled.

Debutante Mehrene as Mahalakshmi is super cute. With milky white complexion,lovely features and decent action she has a good start in TFI.

Sampath as a honest and fire brand police officer ACP Srikanth has done justice to the role, It’s Prudhvi who brought life into comedy part in second half. Murali Sharma as mafia don David is adequate. Senior actress Annapurna played a little role. Satyam Rajesh, Prabhas Srinu and Brahmaji got short but significant comedy roles.The three kids will be liked by all with their cute action

*  Mixed Genre of the movie has elements to appeal all sections of audience
* Comedy as the main quotient,suspense and crime elements appeal to the youth
* The chemistry between the lead pair is good
* Even the beaten to death (in other movies) Factionists thread been dealt stylishly and in engaging way
* References to Nandamuri Balakrishna, Pawan Kalyan’s Attharinti Daredi sequence worked well
* Songs are funky and colorful
* Pre-interval episodes came out very well

– There is five minute short duration lag twice in second half.
– Main story thread becomes slightly redundant once Krishna starts towards Hyderabad on his rescue mission.
– One or two more super hit songs would have accelerated Boxoffice status to next level
– Visual Effects in one particular scene are so cheap

Writer and Director Hanu Raghavapudi makes it to big league with this movie. Complicated story been told in so simplified manner and credit goes to the director. Photography by Yuvaraj is excellent and natural beauty of RayalaSeema has been captured well. Music and background scores are good too. Editing should have been a bit crisp.

Production Values and Promotion by 14Reels is upto their banner reputation and film looked rich yet under control budget.Producers must be appreciated for identifying the good script,casting it well and trusting the director

It is very hard to make a film which appeals to two contradicting genres (Families and Action movie lovers). Hanu Raghavapudi had succeeded in this aspect by narrating KVPG with tightly knitted screenplay and differently. First Half is Good, Second half is equally good except few glitches.

Overall, A clean Comedy family and action entertainer. Watch It !

Nani starrer Kirshna Gadi Veera Prema Gadha is gearing up for a grand audio launch. The movie, directed by HanuRaghavapudi and produced under the 14 Reels Entertainment banner, has released its first look and teaser to a great positive audience response.

The audio launch, which is to be held on the 20th of January, at ShilpakalaVedika is going to be a grand affair, with the who’s who of Tollywood industry said to be attending the function. The audio will be launched by Super Star Mahesh Babu. The music for this movie is scored by Vishal Chandrashekar, and the movie is all set to be released on the 5th of February