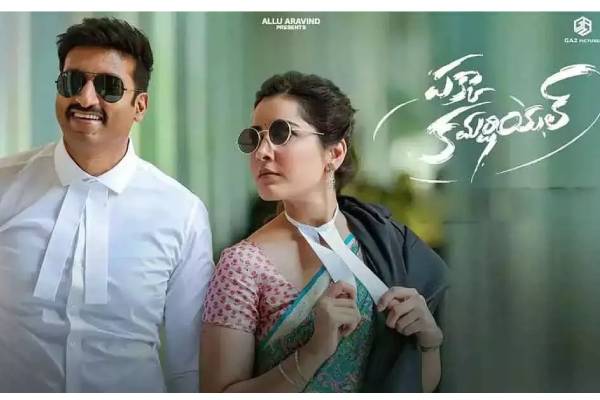 Manly Star Gopichand has delivered a series of flops and the actor pinned many hopes on Pakka Commercial. Maruthi directed the comic entertainer and Rashi Khanna is the leading lady. Satyaraj played a prominent role. GA2 Pictures and UV Creations are the producers. Pakka Commercial released today and here is the complete review of the film.

Suryanarayana Murthy (Satyaraj) is a honest advocate and he is a man of values. An unexpected incident changes his life and he resigns to his profession and leads a simple life. His son Lucky (Gopichand) is a lawyer who is after money and he is purely commercial. He joins as an associate for famous lawyer (Rao Ramesh) because of whom his father loses his job. It is then, Suryanarayana Murthy returns back to his profession as a lawyer against his son. The rest of Pakka Commercial is all about the court battle between a father and his son. Watch Pakka Commercial to know about what happened next.

As the name says, the film is a commercial film which is a regular and predictable attempt. The lead actor is just bothered money and commercial but he changes his acts suddenly which doesn’t appeal to the audience. Entertainment happens to be the strength of Maruthi and he tried hard to induce comedy in every frame. The role of Rashi Khanna as Jhansi was entertaining and she played a serial artist. She enters the court steps after she has issues with her remuneration.

After she gets a bitter experience in the court, she joins as an assistant for Lucky. Some of the episodes are too lengthy and are boring. Jhansi’s character is over written which leaves the audience irritated. Maruthi relies too much on the cinematic liberties. The Entertainment went over board for the most of the time. On the whole, Pakka Commercial is a poor script with predictable and boring narration. Some of the episodes are impressive. Maruthi failed to balance the roles of Satyaraj and Gopichand after Satyaraj returns back as lawyer. The entire flashback is a waste of time. The film is stretched through the character of Varalaxmi Sarathkumar.

Gopichand looks ultra stylish in the role of Lucky and his look is well designed. The actor has done the role of Lucky with ease and his comic timing looks top class. Rashi Khanna gets too much screen presence and her role has repeated scenes. Satyaraj did his part well but his role should have been penned with perfection. Rao Ramesh’s role looks similar to his previous film but he carries it with his comic timing. Sapthagiri’s episodes are boring and Ajay Ghosh is decent. All the other actors are decent.

Pakka Commercial works in bits and pieces. It is a pale and predictable film from Maruthi. Gopichand is stylish and Rashi Khanna gets a lengthy role. Pakka Commercial will not work commercially.