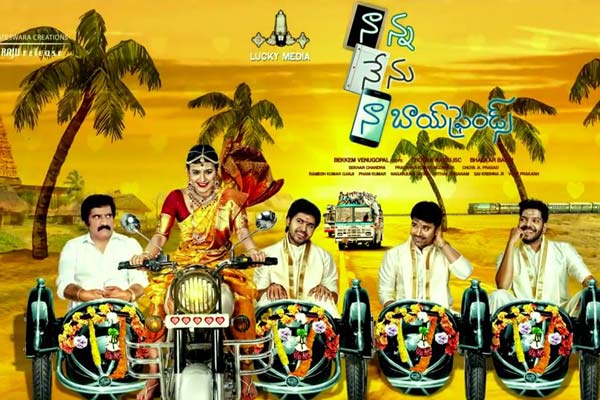 Nanna Nenu Na BoyFriends ( NNNB) movie , as the title signifies the theme, is about a girl,her dad and her three boyfriends. Despite the lack of star cast, this movie is able to generate some pre release buzz for three different reasons

1. Theatrical trailer portrays NNNB as a decent family movie as it is packed with good dialogues by Rao Ramesh such as :

3. This project is backed by noted producer,distributor Dil Raju

Let us analyse whether NNNBF has met the expectations of the youth or family audience ?

Raghavarao ( Rao Ramesh) never disagrees with his daughter Padmavathi ( Hebah Patel),right from her childhood for a reason. After completing engineering at her native, Paddhu moves to hyderabad. As Raghavarao begins looking out for alliances for her, she seeks 6 months time to find a boyfriend herself.

Paddhu picks three youngsters (Noel, AshwinBabu, Parvateesam) as her boyfriends and begins luring them. Tried by such beautiful girl,within no time all three fall in love with her. As things progress, Paddhu runs various competitions among them to find-out the best suited for her. To her surprise, all three comes out triumph.

Rest of the story is how she picks right candidate , how her father resolves the crisis in his daughter’s life

Rao Ramesh : Roles similar to this one are tailor made for Rao Ramesh, he excelled as heroine’s father. However, his histrionics and diction are becoming too predictable. It is time to reinvent himself going forward.

Hebah Patel : With her glamour quotient, Hebah attracts youth but performance wise long way to go.
Noel, Ashwin, Parvateesam are average to below average in their roles

Tejaswi Madivada played a significant character in this movie,did OK

Shakalakka sankar played a cameo as a thief, audience liked his antyakshari episode

Director Bhaskar Bandi has stuffed the movie with required mass, youth elements but failed to have maintain it engaging as a whole package

Nanna Nenu Na Boyfriends takes off in interesting manner and raises a hope of delivering a promising movie, but as it progress becomes predictable and redundant. Director banks on forced comedy, which is not creative, in second half until pre-climax. In pre-climax and climax episodes movie becomes bit heavy. Two of the three boyfriends are unbearable in their action or screen presence. Better casting would have helped.
Verdict :

Nanna Nenu Na Boyfriends movie is neither youth movie nor family movie. Trying to appeal both these sections , NNNB ends up an below average to average movie at the maximum. You may wait for DVD unless you don’t mind farcical comedy.