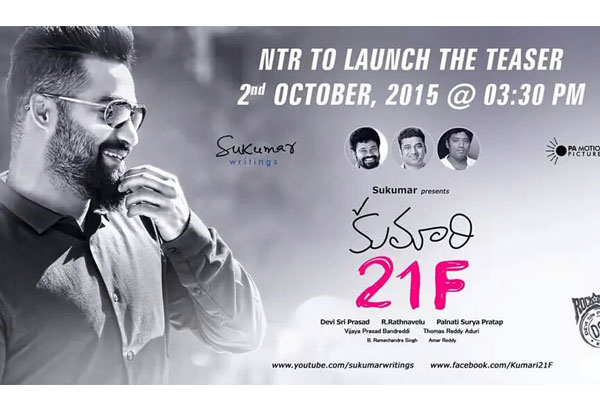 NTR, who is on a breather after completing a hectic UK schedule of ‘Nannaku Prematho’ in Sukumar’s direction, will release the teaser of young hero Raj Tarun’s next film, ‘Kumari 21 F’, on October 2nd on the eve of Gandhi Jayanthi. The teaser launch will take place at 3.30 PM in Hyderabad.

Kumari 21F is the first film for Sukumar as a producer and he has also penned the script for the film. The entire shooting part has been wrapped up and the film will hit the screens on October 30th.

Kumari 21 F is directed by Palnati Surya Pratap and has debutante Heebah Patel as heroine. Top technicians like Ratnavelu, Karthika Srinivas and Devi Sri Prasad have worked for the film. The audio launch will take place very soon.