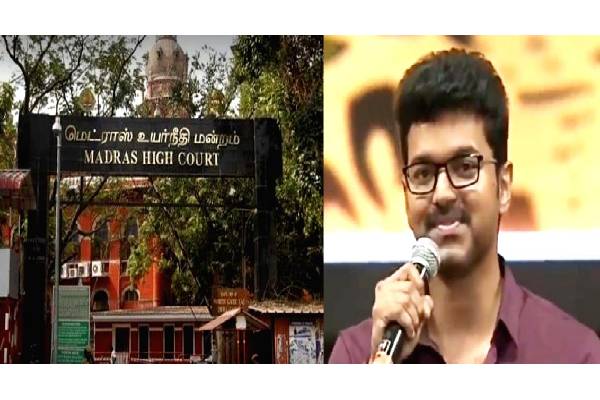 The court also strongly disapproved the actor’s action of not revealing his occupation in his affidavit and held that tax evasion is to be construed as an anti-national habit.

Vijay had imported the prestigious and costly car from the UK. While paying the import duty to the Central government, he approached the court against the payment of entry tax to the Tamil Nadu government.

The luxury car was lying idle as it could run on public roads unless it was duly registered after paying the entry tax.

The court expressed its surprise that Vijay had not even stated his profession or occupation in his affidavit.

“The petitioner, who is a reputed cine actor, is expected to pay the tax promptly and punctually,” the court said.

Noting that the petitioner/actor has large scale fan groups and those fans are seeing the actors as real heroes, the court said in Tamil Nadu, cine heroes have risen to rule the state. “… Therefore, the people are under the impression that they are the real heroes. Thus, they are not expected to behave like a reel heroes. Tax evasion is to be construed as anti-national habit, attitude and mindset and unconstitutional.”

“These actors are portraying themselves as champion to bring the social justice in the society. Their pictures are against corrupt activities in the society. But, they are evading tax and acting in a manner, which is not in consonance with the provisions of the statutes,” it held.

Pointing out that the noble perspective of the Constitution under the Directive Principles can be achieved only if the people of such stature, or the rich pay their taxes unhesitatingly and comply with the laws of the land, it said: “Filing a writ petition, avoiding payment of entry tax and keeping the writ petition pending for about nine years, can never be appreciated and it is not made clear even now, whether the entry tax as applicable has been paid by the petitioner or not.”

In a philosophical note, the court said accumulation of wealth or possessing the world’s prestigious car, Rolls Royce “would not be of any assistance for a better life in our great nation, as our country is enriched with culture and social values”.

“Thus, this court is of the considered opinion that the non-payment of entry tax by the petitioner, can never be appreciated and the petitioner has not respected nor responded to the lakhs and lakhs of his fans, who has paid by viewing his movies and from and out of such money, the petitioner/actor purchased the world’s prestigious car for his personal usage,” it said.

“The reputed persons of this great nation should realise that the money that reaches them is from the poor man’s blood and from their hard-earned money and not from the sky,” the court added.

“In the absence of payment of entry tax by the petitioner within a period of two weeks, the respondents are directed to initiate all further actions by following the procedures as contemplated under the statutes for recovery of the entry tax from the petitioner as well as the consequential liability, if any, as per the provisions of the Act and the Rules,” it ruled.

The court ordered Vijay to pay Rs 1 lakh to the Tamil Nadu Chief Minister’s Covid-19 Public Relief Fund, within a period of two weeks from the date of receipt of a copy of its order.