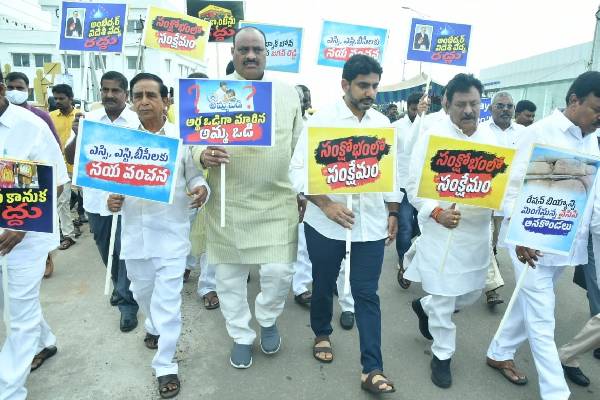 Speaker Thammineni Sitaram suspended the TDP MLAs from the Assembly for the rest of the day on the fourth consecutive day on Tuesday. The members were sent out as they were holding protests at the Speaker’s podium asking for short discussion on welfare programmes.

The TDP MLAs alleged that chief minister Y S Jagan Mohan Reddy had ignored the sub-plan funds for the Scheduled Castes and the Scheduled Tribes. They also blamed the state government for withdrawing Anna Canteens which were opened by the government during the TDP regime.

The TDP MLAs issued notice to the speaker seeking short discussion on the welfare programmes. However, the speaker rejected the notice and took up the business.

The MLAs raising slogans against the government held a protest at the Speaker’s podium. They demanded that the chief minister resign from his post as he failed to implement the welfare schemes in the state and withdrew the Anna canteens.

The speaker made repeated requests to the TDP members to retire to their seats and allow the House to conduct its business. However, the TDP members continued their agitation forcing the speaker to suspend them.

Minister Adimulapu Suresh alleged that the TDP members were politicising every issue. He said that the TDP had opened a few Anna Canteens in October 2018, with an eye on elections. The canteens too were few and were now being used only for political benefit.

He sought to advise the TDP leaders to stop politicising everything and asserted that people were watching.