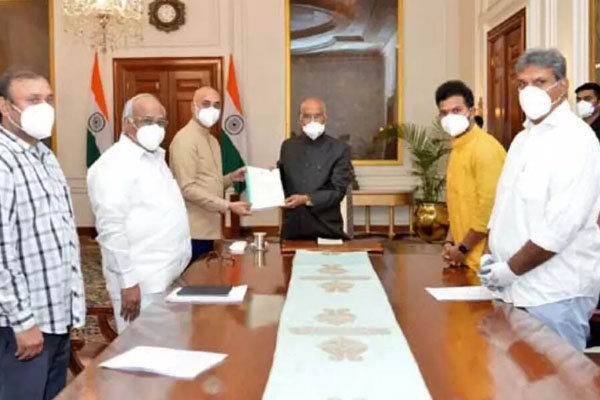 Telugu Desam Party MPs met President Ramnath Kovind in Delhi and complained against the YCP government on the issues of false cases, arrests and Constitutional violations. The MPs appealed for the President’s intervention to prevent the YCP from continuing its atrocities and unlawful rule in Andhra Pradesh.

The MPs alleged that the Jagan Reddy regime was undermining all the four pillars of the Constitution and was harassing even the social media activists. They told Mr Kovind how the daily wage coolies and construction workers faced starvation due to lack of work opportunities, sand shortage and ruling party mining mafia. The corruption scams were going unchecked in 108 ambulances, Coronavirus kits, liquor and reverse tenders in irrigation projects. In all these, the YCP government was crushing the Constitutional safeguards and the Rule of Law.

MPs Kesineni Nani, Galla Jayadev, K Rammohan Naidu and Kanakamedala Rabindra Kumar met the President. After meeting the President, they said that Mr Kovind promised to give instructions to the concerned authorities about their complaints. The President also suggested for raising the issues in the coming Parliament session.