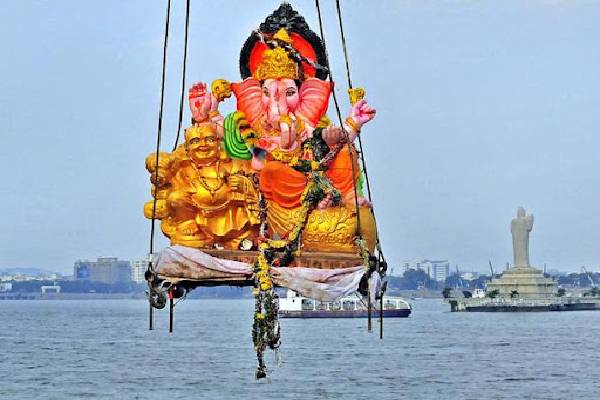 The Telangana High Court on Monday refused to modify its order banning immersion of Ganesh idols made of Plaster of Paris (PoP) in Hussain Sagar lake in Hyderabad.

The court dismissed the revision petition filed by the state government to allow immersion of PoP idols in the lake.

“You created a situation of impossibility, now solve it. We cannot grant permission to people to pollute Hussain Sagar,” the bench said.

“We respect religious sentiments, but there is no scripture that says that we should only pray to Lord Ganesh idols made of Plaster of Paris,” remarked the bench.

It told the state government that if it doesn’t like its order, it can challenge the same before a higher court.

The bench also asked the authorities whether they implement laws or violate them.

The municipal commissioner had also requested the high court to modify its order disallowing immersion of idols from the Tank Bund road.

The petitioner had mentioned that if immersion is not allowed from Tank Bund, it may take up to six days for the immersion of thousands of idols brought to the lake.

“The government has spent a large amount of taxpayers’ money to beautify Tank Bund. Will the immersion of Ganesha idols not cause damage to Tank Bund? Has the government not thought this through,” asked the bench.

Lokesh Kumar also wanted exemption from creating a rubber dam to confine immersion of idols in Hussain Sagar to a limited area. He assured the court that all the debris from the lake will be cleared within 24 hours after the immersion procession is completed.

The court expressed its surprise over the review petition and wanted to know why the government did not convey to it the difficulties in immersion of idols.

The high court, in its order dated September 9, had banned the immersion of PoP idols in Hussain Sagar.

The government on Sunday made an attempt to move a house motion but the court refused to entertain it and asked it to make the attempt on Monday instead. The court took up the hearing in the post-lunch session.

Animal Husbandry and Cinematography Minister Talasani Srinivas Yadav had said on Sunday that by the time the high court delivers its decision on immersion of PoP idols, 35,000 Ganesh idols had already been installed at various locations in Hyderabad and it is not possible for the government to make alternative arrangements by constructing special ponds at such short time.

He said lakhs of people are likely to participate in the immersion procession across the city and all arrangements have been made for peaceful and safe immersion.

The government took the decision to move the review petition after an appeal by the Bhagyanagar Ganesh Utsav Samithi (BGUS).

The Samithi, which organises a mammoth immersion procession every year, had urged the government to file a review petition to ensure that ‘Hindu sentiments’ are protected and the festival is carried out in keeping with the traditions in place.

The BGUS had called the court order a violation of right to freedom of religion.

The court had pronounced its orders on a contempt petition filed by advocate Mamidi Venu Madhav for not implementing the court’s order in the writ petition filed by him seeking a direction to restrain people from immersing idols made of Plaster of Paris in Hussain Sagar lake.

The 10-day long Ganesh festival began on Friday. The festivities will conclude on September 19 with immersion.

Every year, thousands of idols are immersed in Hussain Sagar. Huge idols are brought to the lake in a mammoth processions which start from Balapur on the city’s outskirts.

NGOs, environmental activists and eminent citizens have been voicing concern over the pollution in the lake and demanding curbs on immersion.